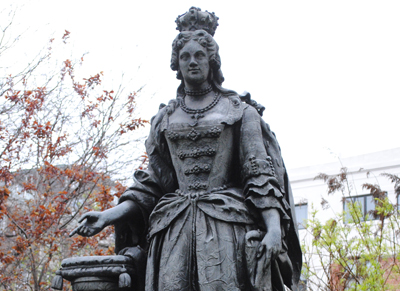 This rectangular-shaped square in Bloomsbury, known for its association with the medical profession, was first laid out in the early 1700s and was named for Queen Anne.

Originally known as Devonshire Square, the space was largely laid out between 1716 and 1725 on land owned by Sir Nathaniel Curzon of Kedlestone and, as with so many of London’s squares, attracted it’s fair share of the well-to-do. Among early residents were several bishops and members of the aristocracy.

One of the most interesting early associations with Queen Square is that of King George III and his consort Queen Charlotte. The king – better known to many as ‘Mad King George’ – was treated for mental illness in a house on the square and there’s a tradition that Queen Charlotte, stored some of the food to be consumed by the king during his treatment in the base of what is now the pub known as the Queen’s Larder (see our previous entry on the pub here).

There’s a statue of a queen in the central gardens which was thought to be of Queen Charlotte. Since it was erected in 1775, there has been some confusion over the statue’s identity – it has been thought at different stages to be of Queen Anne, Queen Mary (co-ruler with King William III), and Queen Caroline (consort of King George II) – a fact which has led to some confusion as to which queen the square was named after (although general consensus now seems to be that it was indeed Queen Anne whom the square was named after).

The houses in Queen Square – which was later associated with artists and literary types – were gradually replaced by institutional buildings relating to, among other things, education and the practice of medicine and today it remains a hub for the medical establishment – the National Hospital for Neurology and Neurosurgery and the Royal London Hospital for Integrated Medicine (formerly known as the Royal London Homoeopathic Hospital) are both located on the east side of the square and there are several other medical-related buildings located around it including the former Italian Hospital (Ospedale Italiano) which was founded by Italian businessman Giovanni Battista Ortelli in 1884 for poor Italian immigrants and since about 1990 has been part of the Great Ormond Street Hospital. 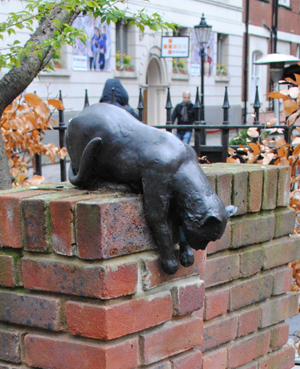 Other prominent buildings located on the square include the Church of St George the Martyr Holborn (number 44) which, built in 1706, predates the square’s formation. The church is known as the ‘sweep’s church’ due to the practice of a parishioner who provided Christmas dinners for 100 chimney sweep apprentices each year.

The gardens themselves are protected by an Act of Parliament passed in the 1830s and the gardens are to this day maintained by trustees appointed under that act. Aside from the statue of the queen, monuments in the gardens include a small plaque commemorating the bomb which landed in the square during a Zeppelin raid in World War I (no one was killed), benches commemorating 16 doctors from the homeopathic hospital who died in the Trident air disaster of 1972, and some lines of poetry on a flower bowl and surrounds by Philip Larkin and Ted Hughes in honor of the Queen’s Silver Jubilee of 1977. Statues include a 2001 bronze of Mother and Child and, (this one we love), a sculpture of Sam the cat, apparently a local resident (pictured)!

For those who may not be aware, the current Diamond Jubilee is, of course, not the first jubilee Queen Elizabeth II has celebrated. In 1977, the Queen and the nation marked her Silver Jubilee, celebrating her 25th year on the throne. 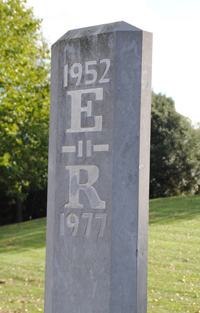 Just as this year is designed as a year of celebration, so too was 1977 with the anniversary of the Queen’s accession culminating in a series events run over a week in early June. They included street parties, the lighting of a chain of beacons across the country (the Queen lit the first fire at Windsor), a national service of thanksgiving at St Paul’s Cathedral (which the Queen went to in the Gold State Coach) and a river progress from Greenwich to Lambeth.

To mark the Jubilee, the Queen and Prince Philip also travelled across the country, visiting as many as 36 counties during a Royal Tour, and went overseas where they visited nine countries as far afield as Australia and New Zealand, the West Indies and Canada.

In London, a number of memorials were installed which can still be visited today. They include:

• The Silver Jubilee Walkway. Opened by the Queen on 9th junee 1977, this is made up of five circular sections which are themselves located in a 15 mile (24 kilometre) circle around the city and takes in many of the city’s greatest sites, including St Paul’s Cathedral, Buckingham Palace, Tower Bridge and Shakespeare’s Globe. For more on the walk, see www.walklondon.org.uk/route.asp?R=3

• South Bank Jubilee Gardens. Originally created to celebrate the Silver Jubilee in 1977, these gardens, located between Waterloo and Westminster Bridges, have recently been remade – including planting 70 new trees – for the Queen’s Diamond Jubilee and the Olympic Games.

• Memorial Urn in Queen Square, Bloomsbury. This monument has inscriptions by poets Philip Larkin (“In times when nothing stood, But worsened or grew strange, There was one constant good, She did not change”) and Ted Hughes (A nation’s a soul, A soul is a wheel, With a crown for a hub, To keep it whole”) in front of and behind it.

• King’s Stairs Memorial Stone. This memorial stone (pictured) located on the edge of King’s Stairs Gardens by the Thames in Bermondsey was first installed to mark the Queen’s Silver Jubilee. The other side of the stone was inscribed during the Golden Jubilee in 2002.

• Plaque on Queen Elizabeth II’s birthplace. We’ve mentioned this plaque at 17 Bruton Street in Mayfair in an earlier entry but it’s interesting to note that it was erected in 1977.

Any others you can think of?