While the Greenwich foot tunnel may these days be more well-known due to the fact it is still open to pedestrians, London’s oldest under-Thames tunnel (also credited as the oldest underwater tunnel in the world) actually runs between Rotherhithe on the river’s southern bank and Wapping on the northern. 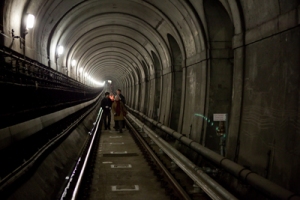 First opened in 1843, the Thames Tunnel (pictured left during a brief reopening to pedestrians in 2010) was the first major project of star Victorian engineer (and delightfully named) Isambard Kingdom Brunel (who, at the age of just 19 started work on the job with his father, a French engineer named Marc Isambard Brunel) and was known for a time as the eighth Wonder of the World.

It was constructed after demand grew for a way to transport goods across the crowded Port of London to the east of London Bridge. Given the height of the masts of larger ships, a bridge was deemed impracticable with the ramps required to take wheeled transport to the necessary height far too long (although this problem was overcome at the end of the 1800s by the use of new bascule technology in the construction of Tower Bridge).

Following several failed attempts to dig a tunnel under the Thames, Marc Brunel was given permission to build the new tunnel in the mid 1820s. The project relied on the use of a ‘tunnelling shield’, a then state-of-the-art technological solution to under river tunnelling which had only a few years earlier been patented by Marc Brunel and Thomas Cochrane, and Brunel initially thought the project would only take three years (it ended up taking as many as 18).

Construction by the newly formed Thames Tunnel Company, which had the support of none other than the Duke of Wellington, commenced in early 1825 at the Rotherhithe end. The shield enabled miners to dig out the tunnel while bricklayers came along behind them. While it significantly reduced the risk of a collapse (although several floods still did occur, taking the lives of six men – a fact which didn’t apparently much deter the sightseers who paid for the privilege of seeing the shield in operation), working conditions remained terrible with the men constantly showered with water from the river which was at that time the city’s main sewer. How many died indirectly as a result of working on the project is unknown. 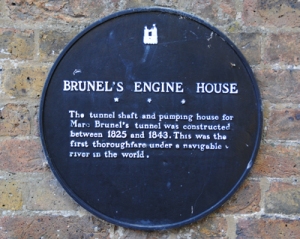 Indeed, such was the stress of the project that Marc Brunel, later knighted for his efforts in building the tunnel, himself suffered a stroke during its construction. Isambard Brunel, who took over as the project’s engineer when the resident engineer fell ill in 1826, himself came close to being killed when he had to flee the flooding tunnel.

After much delay (including seven years in which the unfinished tunnel was left untouched) and several more disasters, the tunnel was finally completed in November, 1841.

After being fitted out with lighting, spiral staircases and roads in the following years, it was finally opened to pedestrians only on 25th March, 1843. While it was originally envisaged that the primary purpose of the tunnel would be to transport goods under the river, this never occurred.

Still, it did capture the public’s attention and as many as 50,000 people walked through the tunnel on the opening day (among the initial visitors to the tunnel was Queen Victoria herself). Within 10 weeks of its opening, a million people (a figure equal to what was then half the population of London) had reportedly passed through it.

Despite the number of people initially using it, however, the tunnel was still not a financial success and over the ensuing years became noted as a gathering place for unsavoury types. In 1865 it was purchased by the East London Railway Company which subsequently incorporated the tunnel into its railway network with both the Wapping and Rotherhithe entrance shafts converted into stations. It later become part of the London Underground network – the  – and since 2010 has been part of the London Overground.

Both stations are still in use and you can get a good sense of what the tunnel was like by riding the overground between Rotherhithe and Wapping. The Brunel Museum in Rotherhithe – actually housed within a building originally used to house machinery for draining the tunnel – see plaque above – is also a great place to find out more about the project and Brunel. Visit www.brunel-museum.org.uk for details.

For more on the life of Brunel, see Steven Brindle’s Brunel: The Man Who Built the World.