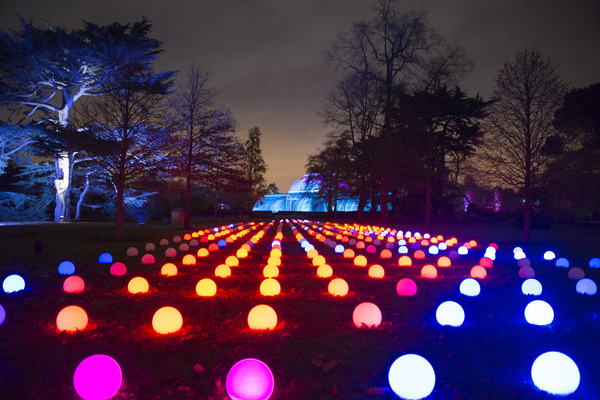 Be dazzled by more than a million twinkling lights at the enchanted wonderland that is Kew Gardens this Christmas.

The Royal Botanic Gardens in London’s west have once again teamed up with entertainment promoter Raymond Gubbay Ltd to create a brand new illuminated trail. It starts with a path lit by hundreds of illuminated globes winding through trees festooned with silvery shards of light, snowflakes and stars and includes attractions such as an enormous glowing ‘Sledge Tree’ – made from more than 360 wooden Santa sledges, and a chorus of ‘Singing Trees’.

Other artistic installations along the trail include an ultraviolet walkway of thousands of continuously moving bubbles (created by Between Art and Technology (BAT) Studio), an enchanted promenade of hundreds of huge glowing peonies, giant grasses and coloured reeds (the work of French art studio TILT), and a host of giant trees, made from thousands of colourful, sparkling flowers complete with holographic petals (creative studio PITAYA) located along the Great Broad Walk Borders (included in the trail for the first time).

The fire garden has also returned – this year as a corridor of intricate pulsing fire sculptures and rotating lantern-lit Christmas trees – as has the Palm House finale in which the pond and glasshouse spring to life in an explosion of laser beams, jumping jets of light and kaleidoscopic projections playing across a giant water screen.

And, of course, there’s roasted chestnuts, mulled cider and Santa and his elves as well as a festive fairground and other food and drink. Open between 5pm and 10pm (timed entries between 5pm and 7.40pm),  the after dark event runs until 1st January. Admission charges apply. For more, see www.kew.org. 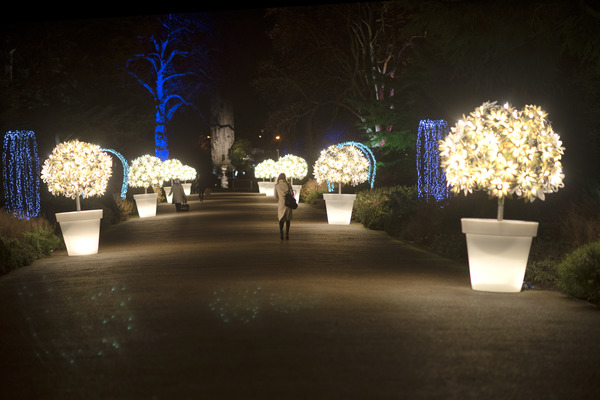 • ‘Oliver Twist’ workhouse, Cleveland Street. The building, recently heritage listed following a campaign to save it, is said to have served as the model for the workhouse in Oliver Twist and was apparently the only building of its kind still in operation when Dickens wrote the book in the 1830s. Dickens had lived as a teenager nearby in a house in Cleveland Street and was living less than a mile away in Doughty Street (now the Charles Dickens Museum) when he wrote Oliver Twist. Thanks to Ruth Richardson – author of Dickens and the Workhouse: Oliver Twist and the London Poor

• Clerkenwell Green. It is here that Mr Brownlow first comes into contact with Oliver Twist and, mistakenly suspecting him of stealing from him, chases him through the surrounding streets. Interestingly, the grass (which you would expect when talking about a green) has been gone for more than 300 years – so it wasn’t here in Dickens’ time either.

• Barnard’s Inn, Fetter Lane. It was here, at one of London’s Inns of Court, that Pip and Herbert Pocket had chambers in Great Expectations. Barnard’s Inn, now the home of Gresham College, is only one of a number of the Inns of Court with which Dickens and his books had associations – the author lived for a time at Furnival’s Inn while Lincoln’s Inn (off Chancery Lane) features in Bleak House and the medieval Staple Inn on High Holborn makes an appearance in his unfinished novel, The Mystery of Edwin Drood. And, as mentioned last week, Middle Temple also features in his books.

• ‘Dickens House’, Took’s Court. Renamed Cook’s Court in Bleak House, the house – located in a court between Chancery and Fetter Lane – was where the law stationer Mr Snagsby lived and worked in the book. It’s now occupied by music promoter and impresario Raymond Gubbay.

• London Bridge. The bridge, a new version of which had opened in 1831 (it has since been replaced), featured in many of Dickens’ writings including Martin Chuzzlewit, David Copperfield and Great Expectations. Other bridges also featured including Southwark Bridge (Little Dorrit) and Blackfriars Bridge (Barnaby Rudge) and as well as Eel Pie Island, south-west along the Thames River at Twickenham, which is mentioned in Nicholas Nickleby.

We’ve only included a brief sample of the many locations in London related in some way to Dickens’ literary works. Aside from those books we mentioned last week, you might also want to take a look at Richard Jones’ Walking Dickensian London,  Lee Jackson’s Walking Dickens’ London or, of course, Claire Tomalin’s recent biography, Charles Dickens: A Life