Housing one of London more unique memorials, Postman’s Park in the City’s north is located on what were once the churchyards and burial grounds of three different churches.

The park – which took its name from its popularity with postal workers who came here to escape their job at the nearby former General Post Office (read a Lost London article on the GPO here) – opened in 1880.

It was originally located on the site of the former churchyard of St Botolph’s-without-Aldersgate and was subsequently expanded to incorporate the adjacent churchyard of St Leonard, Foster Lane, and the burial ground of Christ Church, Greyfriars (also known as Christ Church, Newgate Street). Some of the headstones still stand along the park’s boundaries.

Its key feature is the G.F. Watts Memorial To Heroic Self Sacrifice (pictured, right). Victorian artist and philanthropist George Frederic Watts proposed the memorial commemorating “heroic men and women” who had given their lives to save others to mark Queen Victoria’s Jubilee in 1887 but the memorial which now stands there wasn’t built until 1900.

The memorial consists of a loggia, the inside of which is lined with glazed tablets. Each of these commemorates acts of bravery by “everyday heroes” as they attempted to rescue people from fires, runaway trains, sinking ships and drowning. There were 13 plaques at the time of his death in 1904 and his wife Mary added a further 34.

The latest of the memorials commemorating 62 individuals was added in 2009 (for more details, head to our earlier post here, part of our Curious London Memorials series; you can also find more about the memorial, including a free app, here).

The park also features a sundial and fountain amid bright flower beds and various species of trees including a large banana tree, a dove tree and Tasmanian tree ferns.

Claims to fame include its role in the 2004 film Closer, which starred Natalie Portman, Julia Roberts, Jude Law and Clive Owen (we won’t go into details, just in case you haven’t seen it!).

WHERE: Postman’s Park, between King Edward Street and St Martin’s le Grand (nearest tube stations are St Paul’s and Barbican); WHEN: The park, managed by the Corporation of London, is open 7am to 8pm or dusk (whichever is earlier); COST: Entry is free; WEBSITE: www.cityoflondon.gov.uk/things-to-do/green-spaces/city-gardens/visitor-information/Pages/Postman’s-Park.aspx. 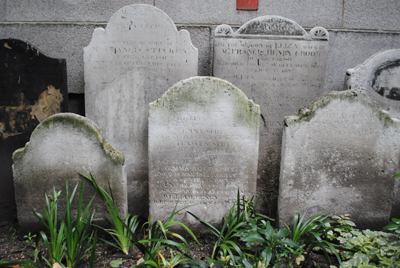