London’s oldest manufacturing company is the same as Britain’s oldest and is, according to the Guinness Book of Records, the Whitechapel Bell Foundry. 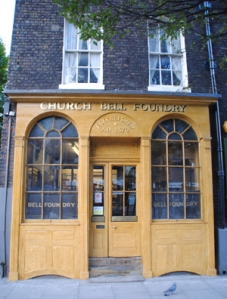 The company was established in 1570 (although founders have been discovered operating in the area as far back as 1420) and, according to its website, still concentrates solely on the manufacture of bells and their fittings with large church bells accounting for 80 per cent of the company’s business. The remainder of the business is involved in manufacturing handbells and other smaller bells.

The foundry’s current buildings, apparently originally used as a coaching inn named The Artichoke, date from 1670 and are presumed to have replaced structures consumed in the Great Fire of London. The foundry had earlier been located in smaller premises on the other side of Whitechapel Road.

The most famous bells cast at the foundry include the Liberty Bell (1752) – the symbol of American independence which cracked when first rung and was recast in Philadelphia, the Great Bell of Montreal Cathedral, ‘Great Tom’ of Lincoln Cathedral, and, of course, Big Ben (1858) – at 13,760 kilograms, the largest bell ever cast at the foundry.

Westminster Abbey and St Paul’s Cathedral also feature bells cast at the foundry and replacement bells for St Mary-le-Bow and St Clement Danes made here following their destruction in World War II and bells from the foundry have been sent as far afield as Australia and India.

Among the most recent bells to be cast at the foundry are the Royal Jubilee Bells, used in the Thames Diamond Jubilee Pageant and now housed at St James Garlickhythe in the City of London (each of the bells, which bear the Royal Arms, is named after a member of the Royal Family – Elizabeth being the largest with others named Philip, Charles, Anne, Andrew, Edward, William and Henry.)

WHERE: 32/34 Whitechapel Road; WHEN: Tours are usually held on Saturdays when no work is being undertaken – see website for dates – but special tours are being held daily from 10am to 5pm, 28th July to 12th August, 2012; COST: The exhibition/museum is free but tours are usually £12 a head for over 14s (Olympic period tours are £10 a head/£25 a family – children under 14 not admitted without adult supervision) – see website for more details on purchasing tickets; WEBSITE: www.whitechapelbellfoundry.co.uk.

The name of Garlickhythe can be explained by its location – the word ‘hythe’ is a Saxon word for a landing place or jetty and it is believed garlic, used as a preservative and medication, was unloaded nearby and even possibly traded on Garlick Hill where the church stands.

The church was rebuilt in the 1300s and again after the Great Fire (it was another of Sir Christopher Wren’s designs and thanks to the abundance of natural light inside was known as ‘Wren’s Lantern’) but it largely escaped damaged in World War II (the projecting tower clock was among the casualities but while a 500 lb bomb buried itself in the south-east corner of the church, it failed to explode).

What bombs failed to do, however, a death watch beetle did and when one was discovered in the roof timbers in the 1950s, the church was closed until 1963 while it was restored. The exterior clock was restored in 1988 and repairs to the south transept were required after a crane counterweight smashed into the church in 1991.

Inside, the church boasts the second highest ceiling  – 40 foot – of any churches in London (St Paul’s being the highest) and much of the carved woodwork inside, including the font cover, altar table and churchwardens pews, is still original.

There is also original ironwork including a mayoral swordrest as well as a Stuart and Georgian coat-of-arms (the Stuart arms are among a number of features which come from St Michael Queenhithe – it was combined with this parish in the late 1800s; St Michael’s was pulled down in 1894 ).

The magnificent Bernhard Schmidt organ was installed in 1718. The church also houses two rare chalices dating from the time of Edward VI in the mid-16th century and some other rare plate as well as the oldest parish registers in England (these date from the 16th century with the first entry being that of the baptism of Edward Butler on 18th November, 1535).

St James Garlickhythe, which sits in the parish of St James Garlickhythe with St Michael Queenhithe and Holy Trinity-the-Less (the latter being another now demolished church), boasts connections to 12 livery companies including the Vintners (the church is located in Vintry Ward) and the Joiners. Among those buried there are six former mayors.

The church is currently appealing for funds for a new ring of eight bells to mark the Diamond Jubilee of Queen Elizabeth II next year.

And we couldn’t mention the church without referring to Jimmy Garlick, the church’s mummy. An embalmed body of an older man, this was discovered in the church vaults in 1855 and, identity unknown, was subsequently put on display so that curious onlookers could, for a small fee, look upon him or apparently even touch him. Jimmy, whose identity remains unknown, is no longer on public view.

Look a little deeper and you’ll find there’s often a fascinating story behind many of London’s seemingly odd place names. Churches are no exception and in this new series we’re looking at some of the stories behind the name. First up, it’s the church of St Andrew-by-the-Wardrobe, a rather austere-looking church which looms up over Queen Victoria Street.

While the present church largely dates from after World War II – it was bombed during the Blitz and only the outer walls remain of what was there before (the previous church was itself a rebuild to the designs of Sir Christopher Wren after an earlier version was burnt down in the Great Fire of 1666) – there has apparently been a church on the site since at least the 12th century. Indeed, in the 13th century it was associated with the then royal residence known as Baynard’s Castle.

The church’s rather unusual name owes its origins to King Edward III’s decision in 1361 to move the Royal Wardrobe – which included his state robes and other valuables – from the Tower of London to a new building which lay near to the church (there’s a plaque in nearby Wardrobe Place marking the former location of the King’s Wardrobe which also burnt down in the Great Fire and was subsequently relocated). Hence St Andrew-by-the Wardrobe.

While the interior of the church is a complete reconstruction of Wren’s original, it does still boast some early treasures including  an original pulpit as well as a font and cover of Wren’s period (these come from the now long gone church of St Matthew Friday Street), a figure of St Andrew dating from about 1600 and another of St Ann (mother of Mary), who is holding her daughter who is in turn holding Jesus, dating from about a century earlier. There’s also a royal coat of arms – dating from the Stuart period – which originally came from St Olave’s Old Jewry.

Among the most prominent residents in the church’s parish was the playwright William Shakespeare (there’s a rather odd oak and limewood memorial to him and a contemporary composer, singer and musician, John Dowland – who was  buried in the churchyard, inside). Another Shakespearian contemporary, Ben Jonson, also apparently lived in the parish. The church also has links with with the Mercers, Apothecaries and Blacksmiths livery companies.

Earlier this year St Andrew-by-the-Wardrobe, which is a sister church to St James Garlickhythe (another unusually named church), celebrated 50 years since its post war reopening in 1961.

WHERE: Access is via St Andrew’s Hill or Queen Victoria Street (nearest Tube stations are St Paul’s and Mansion House). WHEN: The church building and the Chapel of St Ann are normally open for visitors between 10am and 4pm weekdays while the nave is open on Fridays from 11am to 3pm (check with the church before going); COST: Free; WEBSITE: www.standrewbythewardrobe.net.

So we come to the final in our series on Wren’s London. This week we take a quick look at some of Wren’s remaining London works (keep an eye out for our upcoming ‘daytripper’ on Oxford for some detail of his works there)…

• The Monument. Built between 1671-77 to commemorate the Great Fire of London, it was designed by Wren and Dr Robert Hooke. For further information, see our previous post.

• The Temple Bar. Designed by Sir Christopher Wren in 1672 to replace a crumbling wooden predecessor, it’s only recently been returned to the City and now stands adjacent to St Paul’s. For further information, see our previous post.

• Churches. We’ve only looked in depth at a few of the existing churches Wren designed in London. But here are some of the others among the more than 50 he designed that still stand:

• St Benet Paul’s Wharf. Originally completed in 1685, it claims to be the only “undamaged and unaltered” Wren church in the city, having survived World War II intact. Now the Welsh church of the City of London. See www.stbenetwelshchurch.org.uk.

• St James Garlickhythe. Built according to Wren’s design, it was completed in 1682 (the tower not until 1717). It is known as ‘Wren’s Lantern’ due to its light interior. See www.stjamesgarlickhythe.org.uk.

• St Margaret Pattens. Built between 1684 and 1687 after the previous church was destroyed in the Great Fire, the church gets its unusual name of ‘pattens’ from wooden undershoes that were worn to elevate people out of the mud, and were sold nearby. See www.stmargaretpattens.org.

• St Martin-within-Ludgate. Rebuilding was largely completed by 1680. The previous church on the site was where William Penn, founder of Pennsylvania, was married. See www.stmartin-within-ludgate.org.uk.