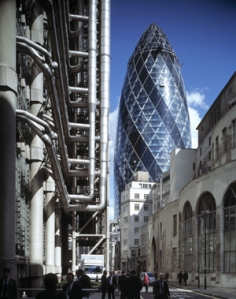 • It’s Open House London weekend and that means your chance to enter scores of buildings not normally open to the public. More than 750 buildings are taking part in this, the 20th year the weekend has been held and there’s also an extensive program of free talks, walks and specialist tours. Among the buildings open this year are the iconic Gherkin building in the City (formally known as 30 St Mary Axe, pictured), Heron Tower in Bishopsgate, numerous livery company halls including that of the Apothecaries, Fishmongers and Carpenters, government buildings including Marlborough House, Westminster Hall, and the Foreign Office and numerous historic residences from the Mansion House, home of the Lord Mayor of London to Osterley Park House in west London. Among the events on offer is a moonlit hike through London tomorrow night to raise money for Maggie’s Cancer Caring Centres and rides on the new Emirates Airline cable car as well as boat tours to the Thames Barriers. If you didn’t order a guide, you can see the program online at the Open House London website – www.londonopenhouse.org. PICTURE: (c) Grant Smith/VIEW Pictures

• A 16th century wooden tankard, found by a mudlark on the Thames foreshore near Ratcliff in London’s east, has briefly gone on display at the Museum of London Docklands. The large vessel, capable of holding three pints, has the initials RH inscribed on the base. It’s unknown for what purpose it was used, perhaps serving as a decanter rather than for individual use and may have been used on a ship. The vessel will be on display at the museum only until 27th September. For more, see www.museumoflondon.org.uk.

• On Now: Renaissance to Goya: Prints and drawings from Spain. Opening at the British Museum today is this new exhibition featuring important prints and drawings by Spanish and other European artists working in Spain and spanning a period from the mid 16th century through to the 19th century. While all the works are drawn from the museum’s collection, many have never been on display before. The artists represented include Diego Velazquez, Alonso Cano, Bartolome Murillo, Francisco Zubaran and Jusepe de Ribera as well as Francisco de Goya. Held in room 90. Admission is free. Runs until 6th January. For more, see www.britishmuseum.org.

Look a little deeper and you’ll find there’s often a fascinating story behind many of London’s seemingly odd place names. Churches are no exception and in this new series we’re looking at some of the stories behind the name. First up, it’s the church of St Andrew-by-the-Wardrobe, a rather austere-looking church which looms up over Queen Victoria Street. 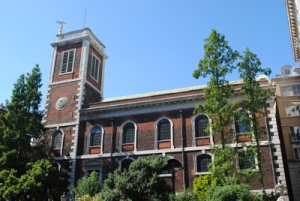 While the present church largely dates from after World War II – it was bombed during the Blitz and only the outer walls remain of what was there before (the previous church was itself a rebuild to the designs of Sir Christopher Wren after an earlier version was burnt down in the Great Fire of 1666) – there has apparently been a church on the site since at least the 12th century. Indeed, in the 13th century it was associated with the then royal residence known as Baynard’s Castle.

The church’s rather unusual name owes its origins to King Edward III’s decision in 1361 to move the Royal Wardrobe – which included his state robes and other valuables – from the Tower of London to a new building which lay near to the church (there’s a plaque in nearby Wardrobe Place marking the former location of the King’s Wardrobe which also burnt down in the Great Fire and was subsequently relocated). Hence St Andrew-by-the Wardrobe.

While the interior of the church is a complete reconstruction of Wren’s original, it does still boast some early treasures including  an original pulpit as well as a font and cover of Wren’s period (these come from the now long gone church of St Matthew Friday Street), a figure of St Andrew dating from about 1600 and another of St Ann (mother of Mary), who is holding her daughter who is in turn holding Jesus, dating from about a century earlier. There’s also a royal coat of arms – dating from the Stuart period – which originally came from St Olave’s Old Jewry.

Among the most prominent residents in the church’s parish was the playwright William Shakespeare (there’s a rather odd oak and limewood memorial to him and a contemporary composer, singer and musician, John Dowland – who was  buried in the churchyard, inside). Another Shakespearian contemporary, Ben Jonson, also apparently lived in the parish. The church also has links with with the Mercers, Apothecaries and Blacksmiths livery companies.

Earlier this year St Andrew-by-the-Wardrobe, which is a sister church to St James Garlickhythe (another unusually named church), celebrated 50 years since its post war reopening in 1961.

WHERE: Access is via St Andrew’s Hill or Queen Victoria Street (nearest Tube stations are St Paul’s and Mansion House). WHEN: The church building and the Chapel of St Ann are normally open for visitors between 10am and 4pm weekdays while the nave is open on Fridays from 11am to 3pm (check with the church before going); COST: Free; WEBSITE: www.standrewbythewardrobe.net.

It’s the most unlikely location for anything to do with a hospital. High above the street in what was a herb garrett above a former church sits what was the operating theatre for females of St Thomas’ Hospital. 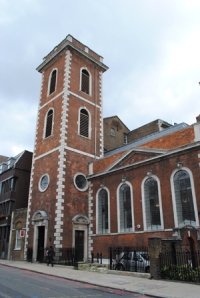 Built in 1703, the attic space resembles something of a large barn and was likely first used for storing and drying herbs by the resident apothecary at the then newly reconstructed St Thomas’ Hospital (this was largely rebuilt at the end of the 17th century on the same site previously occupied by the hospital as far back as the 1200s).

In 1822, the hospital’s governors decided that part of the herb garrett be converted into a new purpose-built operating theatre for female patients. The addition of windows in what was left of the adjoining garret, meanwhile, suggest it may have been used as a recovery ward.

The first thing that assails you as you enter the herb garrett these days, having clambered up a narrow twisting staircase is the sweet, spicy smell of herbs.

There are plenty of these within the garret, each with a hand written card explaining the curative properties they were renowned for – who knew, for example, that the ash of bladderwrack, dried kelp or seaweed, could be used to treat scrofula and goitre, or that the origins of aspirin go back to 1758 when a Chipping Norton clergyman chewed on a willow twig?

Elsewhere in the space are displays featuring early surgeon’s implements (and all the horror that entails), specimen jars containing human organs, anatomical models, pill and medicine making equipment and a display on nursing (there’s also a display on the poet John Keats who briefly served as an apprentice apothecary at St Thomas’ and St Guy’s in 1815-17).

Through the garret is located the operating theatre itself, complete with the wooden operating table and series of seats for spectators. Information panels nearby speak of such things as the blood box located below the floor into which the blood drained away and the speed with which surgeon’s had to work (until 1846 there was no reliable anaesthetic and it wasn’t until 1865 that Sir Joseph Lister introduced antiseptic procedures). There’s also a panel on the resurrection men – people who traded in cadavers to meet the growing needs of anatomists in the 18th and 19th centuries (and whom were known in London and elsewhere to have murdered people to meet the demand for bodies).

For all the faux-horror of nearby attractions like the London Dungeon, it’s here that you can truly experience the horrors some people have had to face as they prepared to go under the surgeon’s knife.