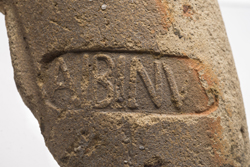 • The most prized archaeological finds from a 1975 excavation of the General Post Office on Newgate Street, one of the largest archaeological sites ever excavated in London, are on show in a new exhibition at the Museum of London. Delivering the Past, the free display features objects from across a 3,000 year period and include everything from Roman era finds such as a dog skull, a rare amber die, a spoon and mortar with the makers’ names of Albinus, Sollus and Cassarius stamped on the side (pictured) to floor tiles and architectural fragments from the medieval parish church of St Nicholas Shambles. There’s also a 17th century Bellarmine beer bottle (these were widely imported from Germany in the 1600s), the only 19th century twisted clay tobacco pipe ever excavated in London, and a 19th/20th century ceramic fragment showing General Post Office branding. The exhibition runs until 8th January. The museum is also offering free 45 minute walks to notable excavation sites around Newgate Street every weekday until the end of October. For more, see www.museumoflondon.org.uk.

• Japan’s native flora comes to Kew from this weekend with a new exhibition in the Shirley Sherwood Gallery of Botanical Art. Flora Japonica features paintings from 30 of the Asian nation’s best contemporary artists as they attempt to capture the beauty of everything from camellias to cherry trees and the delicate Japanese maple. The watercolours have been produced based specimens collected from across Japan as well as, in a couple of cases, specimens found within Kew Gardens. Also on display are works never before seen outside Japan including historic drawings and paintings by revered botanists and artists such as Dr Tomitaro Makino (1863-1957), Sessai Hattori and Chikusai Kato (both Edo period artists), artefacts from Kew’s Economic Botany Collection including traditional Japanese lacquerware collected in the 1880s and wooden panels from 1874, and  illustrations from Kew’s collections such as a 17th century illustrated manual of medicinal plants. Runs from Saturday until 5th March after which the exhibition will move to Japan. Admission charge applies. For more, see www.kew.org.

• An English Heritage blue plaque honouring late Queen frontman Freddie Mercury was unveiled at his childhood home in Feltham, in London’s west, earlier this month. Mercury’s parents bought the house in Gladstone Avenue in 1964 after the family had left Zanzibar for the UK. He was still living in the home when he met Queen band mates Brian May and Roger Taylor. The new plaque was revealed on 1st September, on what would have been the singer’s 70th birthday.  For more, see www.english-heritage.org.uk/visit/blue-plaques/.