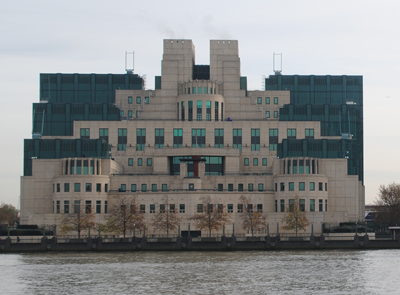 Of course, James Bond has a long-standing relationship with London and there’s a long list of locations that have featured in the many Bond films over the years. But today we’re looking at just one – the Thames-side HQ of spy agency MI6.

The actual London home of the organisation (also known as the Secret Intelligence Service), the not-so-secret building – which is also called the Vauxhall Cross building – is located on Albert Embankment in Vauxhall, sitting alongside Vauxhall Bridge.

It has made numerous appearances in the past few James Bond films – from its first appearance in Golden Eye to its being attacked in The World Is Not Enough, blown up in Skyfall and the featuring of its ruinous remains in the latest film, Spectre.

The subject of some criticism when it was unveiled (and much loved by others), the fortress-like building was designed by architect Terry Farrell. It was built in the early 1990s and officially opened by Queen Elizabeth II in 1994. It suffered – and survived – a real-life rocket attack in 2000.

Other locations to have featured in recent Bond films in London, meanwhile, include Somerset House (passed off as St Petersburg in Golden Eye), the National Gallery (Bond, played by Daniel Craig, first encounters the new Q, played by Ben Wishaw, in Room 34 in Skyfall), and the rooftops of Whitehall (also Skyfall). And that’s just for starters.

The origins of the Thames-side district Lambeth’s name are not as obscure as it might at first seem.

There has apparently been a suggestion in the past that the word ‘lamb’ actually derived from an Old English word meaning muddy place, hence the meaning was ‘muddy landing place’. That theory, however, is now generally discounted.

Lambeth these days is still somewhat in the shadow of the much more famous Westminster river bank opposite but among its attractions is the Imperial War Museum (located in the former Bethlem Hospital, see our earlier post here), Lambeth Palace (pictured above) – London residence of the Archbishop of Canterbury, and, of course, the promenade of Albert Embankment (sitting opposite Victoria Embankment).

The headquarters of MI6 is also located here in a 1994 building designed by Terry Farrell (among its claims to fame is its appearance in the opening scenes of the James Bond film, The World Is Not Enough).

Lambeth – the name is also that of the borough in which the district is located – was formerly home to the Vauxhall Pleasure Gardens which closed in the mid 19th century (see our earlier post here).