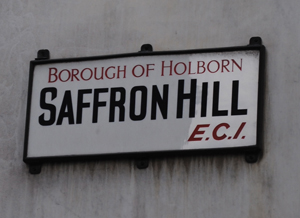 Once at the heart of one of London’s most infamous rookeries or slums, Saffron Hill – located between Holborn and Clerkenwell – is forever associated with Charles Dickens’ 1838 novel, Oliver Twist, and in particular with the arch criminal Fagin.

In the text, Fagin’s den is located “near Field Lane” (the southern extension of Saffron Hill beyond Greville Street) and it is here that Fagin’s young associate, Jack Dawkins (better known as the Artful Dodger), takes Oliver after first encountering him.

As Oliver is led down Saffron Hill, Dickens records his thoughts and it’s worth quoting to get a flavour of the place as he saw it: “A dirtier of more wretched place he had never seen. The street was very narrow and muddy, and the air was impregnated with filthy odours. There were a good many small shops; but the only stock in trade appeared to be heaps of children, who, even at that time of night, were crawling in and out at the doors, or screaming from the inside. The sole places that seemed to prosper amid the general blight of the place, were the public-houses; and in them, the lowest orders of Irish were wrangling with might and main. Covered ways and yards, which here and there diverged from the main street, disclosed little knots of houses, where drunken men and women were positively wallowing in filth; and from several of the door-ways, great ill-looking fellows were cautiously emerging, bound, to all appearance, on no very well-disposed or harmless errands.” (Oliver Twist, p. 55, Vintage, 2007)

Saffron Hill, known as London’s Italian quarter in the 19th century, takes its name from the saffron which was once grown here but which was not to be seen by the time Dickens’ wrote his book. As well as Fagin’s lair, the street is also home to salubrious pub The Three Cripples, Bill Sikes’ favoured watering-hole (The Three Cripples was apparently the name of a lodging house in Saffron Hill during Dickens’ time – it was located next to a pub called The One Tun) .

It’s worth noting that this is only one of many addresses in London associated with Dickens’ characters but the ill-fated Fagin does stand out as one of his most memorable.

PICTURE: Saffron Hill as it is now.

For more on Dickens’ London, check out Alex Werner’s  Dickens’s Victorian London: The Museum of London