Once at the heart of one of London’s most infamous rookeries or slums, Saffron Hill – located between Holborn and Clerkenwell – is forever associated with Charles Dickens’ 1838 novel, Oliver Twist, and in particular with the arch criminal Fagin.

In the text, Fagin’s den is located “near Field Lane” (the southern extension of Saffron Hill beyond Greville Street) and it is here that Fagin’s young associate, Jack Dawkins (better known as the Artful Dodger), takes Oliver after first encountering him.

As Oliver is led down Saffron Hill, Dickens records his thoughts and it’s worth quoting to get a flavour of the place as he saw it: “A dirtier of more wretched place he had never seen. The street was very narrow and muddy, and the air was impregnated with filthy odours. There were a good many small shops; but the only stock in trade appeared to be heaps of children, who, even at that time of night, were crawling in and out at the doors, or screaming from the inside. The sole places that seemed to prosper amid the general blight of the place, were the public-houses; and in them, the lowest orders of Irish were wrangling with might and main. Covered ways and yards, which here and there diverged from the main street, disclosed little knots of houses, where drunken men and women were positively wallowing in filth; and from several of the door-ways, great ill-looking fellows were cautiously emerging, bound, to all appearance, on no very well-disposed or harmless errands.” (Oliver Twist, p. 55, Vintage, 2007) 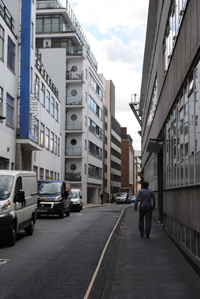 Saffron Hill, known as London’s Italian quarter in the 19th century, takes its name from the saffron which was once grown here but which was not to be seen by the time Dickens’ wrote his book. As well as Fagin’s lair, the street is also home to salubrious pub The Three Cripples, Bill Sikes’ favoured watering-hole (The Three Cripples was apparently the name of a lodging house in Saffron Hill during Dickens’ time – it was located next to a pub called The One Tun) .

It’s worth noting that this is only one of many addresses in London associated with Dickens’ characters but the ill-fated Fagin does stand out as one of his most memorable.

PICTURE: Saffron Hill as it is now.

For more on Dickens’ London, check out Alex Werner’s  Dickens’s Victorian London: The Museum of London

• Ye Olde Cheshire Cheese. This pub is a Fleet Street institution with parts of the current building dating back to 1667 when it was rebuilt following the Great Fire. Dickens was among numerous literary figures who frequented the premises – the pub is perhaps most famously associated with the lexicographer Dr Samuel Johnson (although there is apparently no recorded evidence he ever attended here); other literary figures who came here include Mark Twain and Sir Arthur Conan Doyle – and, according to a plaque in Wine Court, worked out of the pub for a period while producing his journal All The Year Round.

• The One Tun, Saffron Hill. Said to have been established as an ale house on its present site in 1759, the pub was rebuilt in the mid-Victorian era  and was apparently patronised by Dickens between 1833 and 1838. It’s also apparently the inspiration for the pub called The Three Cripples in Oliver Twist (The Three Cripples was actually a lodging house next door to the One Tun and didn’t sell ale). For more, see www.onetun.com

• The George Inn, Southwark. Dating from the 17th century, the George Inn in Borough High Street is the last galleried coaching inn left standing in London and is now cared for by the National Trust (and leased for use by a private company). Dickens is known to have come here when it was running as a coffee house and he mentions it in the book, Little Dorrit. For more, see     www.nationaltrust.org.uk/george-inn/.

• George & Vulture, Castle Court (near Lombard Street). Established in the 18th century on the site of an older inn, this well-hidden pub was not only frequented by Dickens but is mentioned in The Pickwick Papers more than 20 times.

• The Grapes, Limehouse. Formerly known as The Bunch of Grapes, there has been a pub on the site for almost more than 430 years. Dickens was known to be a patron here (his godfather lived in Limehouse) and mentioned the pub – renamed The Six Jolly Fellowship Porters – appears in his novel Our Mutual Friend. For more, see www.thegrapes.co.uk.

• Ye Olde Mitre, Ely Place. This pub dates from the mid 1500s by Bishop Goodrich of Ely to house his retainers and later rented out to Sir Christopher Hatton (it still houses the remains of a cherry tree which Sir Christopher is said to have danced around during a May Day celebration with none other than the future Queen Elizabeth I). Dickens (and the ubiquitous Dr Johnson) are both said to have drunk here.

• And lastly, The Dickens Inn in St Katharine Docks. It’s worth noting up front that Charles Dickens had nothing to do with this pub – dating back to at least 1800, it was once a warehouse and is thought to have been used to either house tea or play a role in a local brewing operation – but it was his great grandson, Cedric Charles Dickens, who formally opened the pub in 1976, apparently declaring, “My great grandfather would have loved this inn”. For more, see www.dickensinn.co.uk.