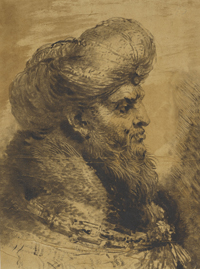 • The UK’s first major exhibition on the work of the innovative but violent 17th century artist Giovanni Benedetto Castiglione opens tomorrow at the Queen’s Gallery next to Buckingham Palace. The exhibition, which features 90 drawings and prints from the Royal Collection, is aimed at re-establishing Castiglione as one of the greatest artists of the Baroque period, thanks to his being credited with creating huge drawings in oil directly on paper, producing about 60 etchings and inventing the technique of monotype. Works include his monotype prints Head of an oriental (late 1640s) and The Nativity with angels (about 1655), a translation of Titian’s Sacred and Profane Love and drawings like Circe with the companions of Odysseus transformed into animals. Castiglione’s “nomadic” career was marred by his violent temperament – he was repeatedly before the courts for assaulting people, apparently tried to throw his sister off a roof and was forced to leave Rome because, it is believed, he had committed murder. Castiglione: Lost Genius runs with Gifted: From the Royal Academy to The Queen, an exhibition of prints and drawings given to the Queen by Royal Academicians to mark her Diamond Jubilee, until 16th March. Admission charge applies. For more, see www.royalcollection.org.uk. PICTURE: Giovanni Benedetto Castiglione, The head of an oriental, late 1640s. Royal Collection Trust/©Her Majesty Queen Elizabeth II 2013.

• The restored Met Locomotive 1 and the Victorian Jubilee Carriage 353 will be on show this weekend as part of the London Transport Museum’s Open Weekend at its Acton Depot. Visitors will be able to explore the depot’s vast collection of more than 400,000 objects along with a range of other activities including miniature tram and railway rides, heritage bus rides, talks and film screenings, and costumed interpreters as well as the chance to watch artist Ross Ashmore paint the locomotive and Jubilee Carriage. The weekend kicks off tomorrow. For more information and bookings, see www.ltmuseum.co.uk/whats-on/museum-depot/events.

One thought on “Around London – Reclaiming Castiglione; transport open weekend; and, Australia at the RA…”