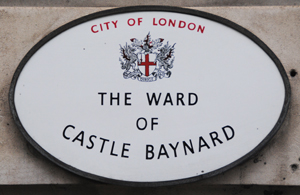 The first Baynard’s Castle was built in the late 11th century by Ralph Baynard (Baignard) and is believed to have replaced an earlier fortification at the site at the junction of the Thames and the Fleet rivers (the river now emerges into the Thames under Blackfriars Bridge).

Baynard (his name may be the origin of the name for Bayswater – Baynard’s Watering place – see our earlier post here), was the sheriff of Essex and a supporter of William the Conqueror.

The castle – which is said to have featured walls and parapets and which is generally said to have been on the waterfront (although some have said it was located inland) – remained in Baynard’s family until the reign of King Henry I when in 1111, his grandson William Baynard apparently forfeited his lands for supporting Henry’s eldest brother and would-be king, Robert Curthose.

It was later passed to the King’s steward Robert Fitz Richard, son of the Earl of Clare, and is known to have been inherited by his grandson, Robert Fitzwalter.

Fitzwalter, however, was a key opponent of King John and as early as 1212 he was in hot water for his part in a conspiracy against the king, although he stated it was because the king tried to seduce his daughter, Matilda the Fair. Either way, he escaped trial by heading to France and John seized the opportunity to raze the castle which he did on 14th January, 1213.

Fitzwalter was later forgiven under an amnesty and went on to play a leading role among the baronial opposition to Kong John – he was among 25 barons charged with enforcing the promises of the Magna Carta of 1215.

The name Baynard’s Castle is remembered in the London ward of Castle Baynard (pictured) which covers the area in which it once stood.