There’s quite a few whose London residence (or otherwise) is commemorated by more than one blue plaque. So, breaking away from our usual ‘one plaque’ format, here were listing five of those who have made the grade… 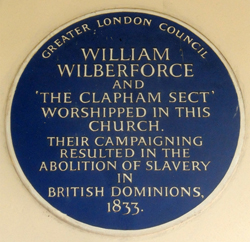 2. Dr Samuel Johnson (1709-1784). Like Wilberforce, the 18th century lexicographer Dr Johnson has three English Heritage blue plaques to his name. The first, on his famous Gough Square property in the City of London we’ve already mentioned (see our earlier post here), while the second is on a property at 8 Russell Street, Covent Garden, then occupied by bookseller Thomas Davies, which was where Dr Johnson famously first met James Boswell in 1763. The third time Dr Johnson’s name appears, more unusually, is on a plaque commemorating Essex Street – Dr Johnson is among a number of names listed on it for his role in establishing an “evening club” at the pub, the Essex Head, in the street in 1783.

3. Samuel Pepys (1633-1703): The 17th century diarist seems to pop-up everywhere in central London so it’s not surprising there are two plaques in the English Heritage blue plaques scheme dedicated to him (although both are located in the same street – one he apparently liked very much). The plaques are located at number 12 and number 14 Buckingham Street in Covent Garden and both mark the site of a Pepys residence.

4. Virginia Woolf (1882-1941): The writer, publisher and literary critic’s name appears on two properties – at 29 Fitzroy Square in Fitzrovia where Woolf lived between 1907-1911 and on Hogarth House at 34 Paradise Road in Richmond where she and Leonard Woolf lived between 1915-1924 (and also where they founded the Hogarth Press in 1917).

5. William Morris (1834-1896): The poet and artist has two English Heritage blue plaques to his credit – the first on 17 Red Lion Square in Holborn where Morris lived in a flat from 1856-1859 with Sir Edward C Burne-Jones, and the second on Red House in Bexleyheath where he and his wife Jane Burden lived from 1860-1865.

One thought on “10 notable blue plaques of London – 5. Five Londoners with more than one blue plaque…”