Celebrating its 250th anniversary this year, The Royal Academy of Arts opens its “new” expanded £56 million campus on Saturday.

Designed by Sir David Chipperfield, the new two acre Royal Academy campus features 70 per cent more public space than the RA’s original Burlington House blueprint which will enable the institution to expand its programs of exhibitions and events and create new free displays of art and architecture.

One of the key features of the redevelopment is the new Weston Bridge between the institution’s landmark property, Burlington House, and the RA’s formerly “unloved” building at 6 Burlington Gardens which unites the two-acre campus and creates a new route between Piccadilly and Mayfair.

The Grade II-listed building on Burlington Gardens, which the RA bought in 1991 and which was previously home to, among other things, the Museum of Mankind, has been refurbished and a 250 seat lecture theatre, the Benjamin West Lecture Theatre, inserted along with a new architecture studio within The Dorfman Senate Rooms – restored by architect Julian Harrap – for free architectural displays.

A new public route through the campus has integrated the Royal Academy Schools into the visitor experience with the new Weston Studio, a public project space for students and alumni, and provides views of the Schools’ Corridor and the newly landscaped Lovelace Courtyard, providing visitors with a “greater insight into Britain’s longest established art school”.

It also takes visitors through the Gabrielle Jungels-Winkler Galleries, a suite of three day-lit galleries for temporary exhibitions (Tacita Dean’s LANDSCAPE, the inaugural display, opens Saturday) and past the new Royal Academy Collection Gallery where works by the likes of Michelangelo, Reynolds, Kauffman, Thornhill, Constable, Gainsborough and Turner can be seen. There’s also a new Clore Learning Centre.

New places to eat and drink within the complex include the Senate Room bar and restaurant, and cafes and shops located on either side of the Burlington Gardens entrance.

The Royal Academy was founded by King George III in 1768 after he was presented with a petition by architect Sir William Chambers which had been signed by 36 artists and architects seeking to “establish a society for promoting the Arts of Design”. Initially based in Pall Mall, the institution’s first official home was in the new Somerset House. In the 1830s, it moved to Trafalgar Square where it shared premises with the newly created National Gallery and in 1867, the institution has moved to Burlington House where it’s been located ever since.

To celebrate the opening of the “new” Royal Academy, there will be a weekend-long “art party” this weekend with free workshops, tours, displays, late-night performances and DJs. Highlights will include performances by The Uncollective and Rachael Plays Disco; collaborative mural drawing, party hat making, architectural model making, RA Collection gallery tours, and a family printmaking workshop in the new Clore Learning Centre. The Annenberg Courtyard will host street food and cocktail bars.

PICTURES: Top – The Weston Bridge and The Lovelace Courtyard/Below – The Benjamin West Lecture Theatre. (Both images by Simon Menges). 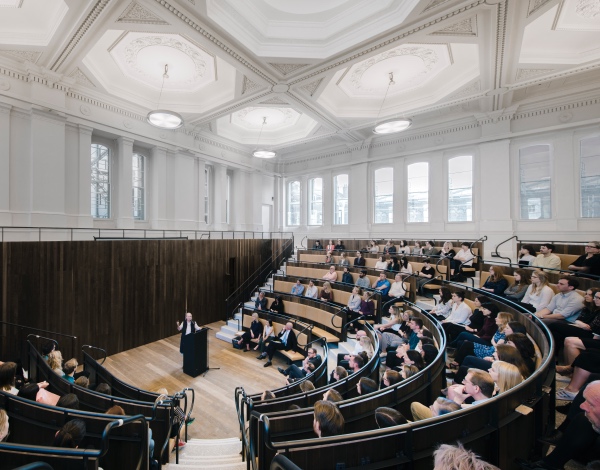