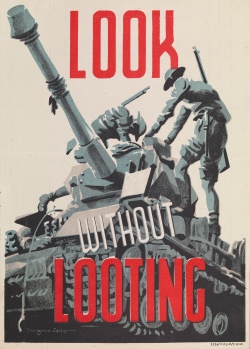 Exhibitions exploring why culture and heritage are attacked during times of war and how cultural treasures in British museums and galleries were protected during World War II open at London’s Imperial War Museum on Friday. What Remains – which highlights both historic and contemporary instances in which buildings, places, art and artefacts have been deliberately targeted during times of conflict as well as examples of resistance, protection and restoration, and, Art in Exile – which looks at the role UK cultural organisations have played in wartime, are both part of Culture Under Attack, a free season of events that explore how war threatens cultural heritage. Also launching as part of Culture Under Attack this week is Rebel Sounds, an immersive exhibition that reveals how music has been used to resist and rebel against war and oppression with examples from Nazi Germany in the 1930s, Northern Ireland in the 1970s, Serbia in the 1990s and present day Mali. All three displays run until 5th January. For more, see www.iwm.org.uk/seasons/culture-under-attack. PICTURE: British Army poster from 1943, created to educate and inform its soldiers of the importance of respecting property, including cultural heritage (© IWM)

• Sir Arthur Pearson, newspaper publisher and founder of St Dunstan’s (Blind Veterans UK), has been remembered with an English Heritage Blue Plaque. The plaque was unveiled at his now Grade II*-listed home on Portland Place in Marylebone last week, the place where he lived with his wife and some of the blinded servicemen supported by St Dunstan’s in the later years of World War I and those following. Pearson had made a fortune as a press magnate, founding the Daily Express in 1900 and later purchasing The Evening Standard but his attention turned to campaigning for the blind after he was told he would lose his sight in 1913. For more on English Heritage Blue Plaques, see www.english-heritage.org.uk/visit/blue-plaques/.

• The largest ever exhibition of the work of pioneering Greek artist Takis (Panayiotis Vassilakis) has opened at the Tate Modern this week. Takis features more than 70 works by the self-taught artist – renowned as a “sculptor of magnetism, light and sound” –  including a rarely-seen Magnetic Fields installation, a series of musical devices generating resonant and random sounds, and forests of his antenna-like Signals. Can be seen until 27th October. Admission charge applies. For more, see www.tate.org.uk.