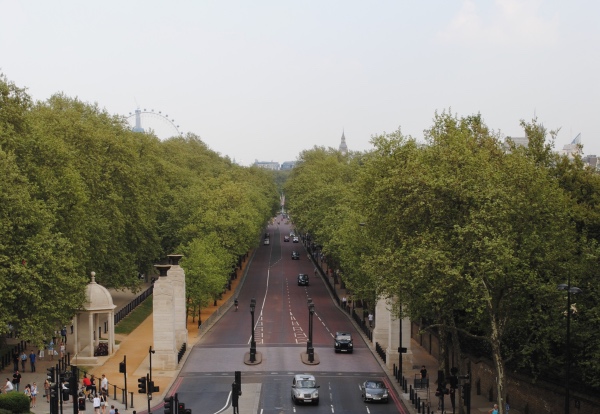 It was on this road connecting the western end of The Mall outside Buckingham Palace with Hyde Park Corner that an infamous incident took place during Queen Victoria and Prince Albert’s early years together.

For it was from a footpath on Constitution Hill that the first of eight assassination attempts were made on the Queen as the couple – the Queen then pregnant – rode out from the palace in a low slung carriage headed for Hyde Park as was their custom.

Edward Oxford was just 18-years-old when at on 10th June, 1840, he took up a position on a footpath on Constitution Hill where he stood for a couple of hours before, at about 6pm, as the royal couple’s carriage sailed past, he fired two pistols at them.

Both shots missed (in fact, no bullets were ever found) and Queen Victoria was quick to order the carriage to drive on (she and Albert would also ride out along the same route the next day despite the scare – this time there was a sizeable crowd of well-wishers eager to convey their good sentiments to the Queen and a procession of these followed their carriage up the hill to Hyde Park).

Oxford, meanwhile, was immediately seized by onlookers and stripped of his guns. He immediately admitted his crime, was subsequently arrested, charged with treason and later acquitted on grounds of insanity before being detained in an asylum at Her Majesty’s pleasure (he was eventually discharged with the proviso that he head to one of England’s overseas colonies and ended up living out his days in Melbourne, Australia).

An interesting footnote is that future artist John Everett Millais, then aged just 11-years-old, was among those standing on Constitution Hill watching the Queen drive past on the day of the assassination attempt.

There were another seven assassination attempts on Queen Victoria over the ensuing years. For more on them, check out Paul Thomas Murray’s detailed book Shooting Victoria: Madness, Mayhem and the Modernisation of the Monarchy.

PICTURE: A view down Constitution Hill towards Buckingham Palace fro, the top of Wellington Arch.

One thought on “10 sites from Victoria and Albert’s London – 3. Constitution Hill…”