• Representations of the pregnant female body across 500 years of portraiture are the subject of a major new exhibition opening at the Foundling Museum on Friday. Portraying Pregnancy: From Holbein to Social Media features paintings, prints, photographs, objects and clothing from the 15th century to the present day as it explores the different ways in which pregnancy was – or wasn’t – represented as well as how shifting social attitudes have impacted on depictions of pregnant women. Highlights include Holbein’s portrait of Thomas More’s daughter Cicely Heron, the maternity dress that Princess Charlotte wore for an 1817 portrait painted by George Dawe shortly before her death and William Hogarth’s The March of the Guards to Finchley (1750), which features a heavily pregnant woman. There’s also a previously unseen work by Jenny Saville, Electra (2012-2019), Marc Quinn’s Alison Lapper (8 Months) (2000) and Lucien Freud’s Girl with Roses (1947-8) which depicts his first wife Kitty. Runs until 26th April. Admission charge applies. For more, see www.foundlingmuseum.org.uk. 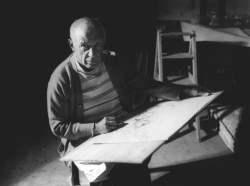 • The most comprehensive exhibition ever held focused on Pablo Picasso’s imaginative and original uses of paper opens at the Royal Academy of Arts this Saturday. Held in the Main Galleries, Picasso and Paper features more than 300 works from across the span of the artist’s career as it explores the “universe of art” he invented involving paper. Highlights include Women at Their Toilette (winter 1937-38) –  an extraordinary collage of cut and pasted papers measuring 4.5 metres in length (being exhibited in the UK for the first time in more than 50 years), outstanding Cubist papiers-collés such as Violin (1912), and studies for Les Demoiselles d’Avignon (1908) such as Bust of Woman or Sailor as well as drawings like Self-portrait (1918) and Seated Woman (Dora) (1938). His masterpiece of the Blue Period, La Vie (1903) will also be in the display as well as his Cubist bronze Head of a Woman (Fernande) (1909) and monumental sculpture Man with a Sheep (1943), and the 1955 film Le Mystère Picasso, which records Picasso drawing with felt-tip pens on blank newsprint. Runs until 13th April. Admission charge applies. For more, see www.royalacademy.org.uk. PICTURE: Key 486, Pablo Picasso drawing in Antibes, summer 1946. Black-and-white photograph, Photo © Michel Sima / Bridgeman Images © Succession Picasso/DACS 2019

• On Now – The Cato Street Conspiracy: A Terrorist Plot in Georgian London. This exhibition at the City of London’s Guildhall Library draws on contemporary accounts and pictures to tell the story of the conspiracy and its participants. The conspiracy, which was uncovered in early 1820, involved a plot to kill the British Prime Minister and Cabinet Ministers. Thirteen of the conspirators were arrested and five executed while five others were transported to Australia. A policeman was killed in the operation to arrest those responsible. This free exhibition runs until 30th April. For more follow this link.