Having recently been granted protection as a scheduled monument, the landscape feature known as King Henry’s Mound is located in Richmond Park in south-west London.

It is believed to be a prehistoric round barrow, possibly dating from between 2,400 and 1,500 BC – a period spanning the Late Neolithic to the Late Bronze Age.

Its name, however, comes from the legend that King Henry VIII waited on top of the mound on 19th May, 1536, watching for a rocket to be launched from the Tower of London that would confirm his wife Anne Boleyn had been executed for treason (and so allow him to marry Jane Seymour).

The truth of that is unlikely – although it is possible to see St Paul’s Cathedral from the mound (it’s a view that is protected, as well as, to the west Windsor Castle and the Thames Valley), King Henry VIII was apparently in Wiltshire at the time.

The mound, however, was linked to kings as far back as 1630 when a map was published listing it as ‘Kings Standinge’, ‘standinge’ being a reference to a platform on which those not involved in a hunt could stand and watch.

Both King Henry VIII and his daughter Queen Elizabeth I are known to have hunted here – in fact, it was King Henry VIII’s father, King Henry VII, who built a royal palace at Richmond and named it after his estate in Yorkshire. 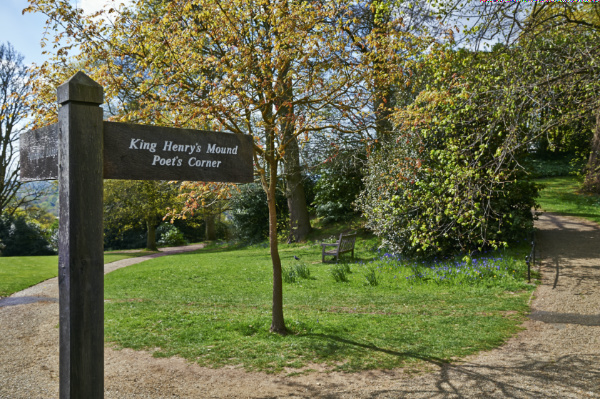 The mound was later incorporated into the gardens of Pembroke Lodge in the 19th century, during much of the latter half of which the property was home to Prime Minister Lord John Russell.

Today the Grade I-listed Richmond Park is managed by the Royal Parks.

For more on Richmond Park, head to www.royalparks.org.uk/parks/richmond-park.