So, first for the 10 (more) curious London memorials list…

And, for the first curious London memorials list, which we ran way back in 2011…

9. The Golden Boy of Pye Corner

5. Eros (or the Shaftesbury Memorial Fountain)

Hope you’ve enjoyed them. We look forward to bringing you our next series from next Wednesday… 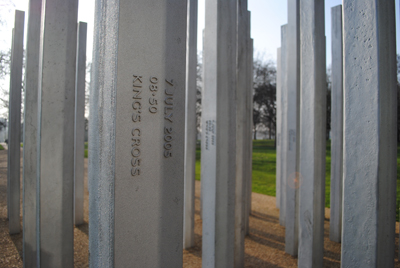 It’s not immediately obvious what this series of upright stainless steel pillars standing on the eastern edge of Hyde Park has been placed there for.

But look a little closer and you’ll see inscribed upon a date which any long-term Londoner immediately recognises – 7th July, 2005: the day when a series of bombs claimed 52 lives on three trains and a bus at various locations around central London.

The memorial, designed by architects Carmody Groarke and engineering team Arup working in consultation with victims’ representatives, Royal Parks and the Department for Culture, Media & Sport, consists of 52 pillars – one for each victim of the bombings.

The 3.5 metre high, 850 kilogram pillars are clustered together in four groups representing the four locations of the bomb attacks – Tavistock Square, Edgware Road, King’s Cross and Aldgate. They are marked with the times, dates and locations of the bombings and there’s also a 1.4 tonne stainless steel plaque upon which are written the names of the victims located nearby.

The RIBA award-winning memorial, which is located just to the north of the colossal statue Achilles and Hyde Park Corner, was unveiled by Prince Charles and Lady Camilla on the fourth anniversary of the attack in 2009.

This year marks the 160th anniversary of the transfer of the care of the Royal Parks to the government (meaning the public was freely able to enjoy access for the first time). To celebrate, over the next weeks we’ll be taking a look at the history of each of them. First up is the 142 hectare Hyde Park, perhaps the most famous of all eight Royal Parks.

Formerly owned by Westminster Abbey, King Henry VIII seized the land in 1536 for use as a private hunting ground. He had it enclosed with fences and the Westbourne Stream, which ran through the park – it now runs underground – dammed.

It remained the king and queen’s private domain (Queen Elizabeth I is known to have reviewed troops there) until King James I appointed a ranger to look after the park and permitted limited access to certain members of the nobility in the early 17th century.

The park’s landscaping remained largely unaltered until the accession of King Charles I – he created what is known as the ‘ring’ – a circular track where members of the royal court could drive their carriages. In 1637, he also opened the park to the public (less than 30 years later, in 1665, it proved a popular place for campers fleeing the Great Plague in London).

During the ensuring Civil War, the Parliamentarians created forts in the park to help defend the city against the Royalists – some evidence of their work still remains in the raised bank next to Park Lane.

After King William III and Queen Mary II moved their court to Kensington Palace (formerly Nottingham House) in the late 1600s, they had 300 oil lamps installed along what we know as “Rotten Row’ – the first artificially lit road in the country – to enable them and their court to travel safely between the palace and Westminster.

The natural looking Serpentine – the great, 11.34 hectare, lake in the middle of Hyde Park (pictured) – was created in the 1730s on the orders of Queen Caroline, wife of King George II, as part of extensive work she had carried out there. It was Queen Caroline who also divided off what we now know as Kensington Gardens from Hyde Park, separating the two with a ha-ha (a ditch).

The next major changes occurred in the 1820s when King George IV employed architect and garden designer Decimus Burton to create the monumental park entrance at Hyde Park Corner – the screen still remains in its original position while Wellington Arch was moved from a parallel position to where it now stands (see our previous posts for more on that). Burton also designed a new railing fence and several lodges and gates for the park. A bridge across the Serpentine, meanwhile, was built at about the same time along with a new road, West Carriage Drive, formally separating Hyde Park and Kensington Gardens.

While the basic layout of the park has been largely unchanged since, there have been some additions – among them, the establishment in 1872 of Speaker’s Corner as a place to speak your mind in the north-east corner of the park (near Marble Arch), the creation in 1930 of the Lido for bathing in warm weather, and, more recently, the building of the Diana, Princess of Wales’ Memorial Fountain (unveiled in 2004), and the 7 July Memorial (unveiled in July 2009).

Other sculptures in the park include Isis (designed by Simon Gudgeon, located on the south side of the Serpentine), the Boy and Dolphin Fountain (designed by Alexander Munro, it stands in the Rose Garden), and a monumental statue of Achilles, a memorial to the Duke of Wellington designed by Richard Westmacott, near Park Lane. There are also memorials to the Holocaust, Queen Caroline, and the Cavalry as well as a Norwegian War Memorial and a mosaic marking the site of the Reformer’s Tree (the tree was burnt down during the Reform League Riots of 1866).

The park has been integral part of any national celebrations for centuries – in 1814 a fireworks display there marked the end of the Napoleonic Wars, the Great Exhibition – with the vast Crystal Palace – was held there in 1851 and in 1977 a Silver Jubilee Exhibition was held marking Queen Elizabeth II’s 25 year reign. Cannons are fire there on June 2nd to mark the Queen Elizabeth II’s coronation and on 10th June for the Duke of Edinburgh’s birthday.

Facilities these days include rowing and pedal boats, tennis courts, deck chairs, a restaurant and cafe (the latter based in the Lido) and, of course, some Boris bikes. There is a heritage walk through the park which can be downloaded from the Royal Parks website.

Prince Charles and the Duchess of Cornwall were among those to pay their respects at a new memorial remembering those 155 Britons who were among the 225,000 people died in the 2004 Indian Ocean tsunami last week. The 115 tonne memorial, located in gardens at the Natural History Museum in South Kensington, was designed by architecture studio Carmody Groarke. It is sculpted from granite quarried from France and was funded by a £550,000 grant from the Department for Culture, Media and Sport. Carmody Groarke was also involved in the design of the 7 July Memorial which, located in Hyde Park, commemorates the 52 people killed in the suicide bombings which took place in London in 2005. It was unveiled by Prince Charles in 2009.