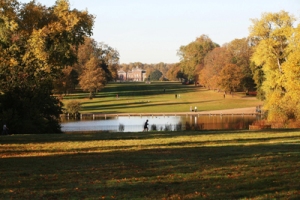 Once the western part of King Henry VIII’s hunting ground, the 111 hectare Kensington Gardens is now primarily associated with the palace which sits at its heart.

The origins of the gardens go back to 1689 when King William III and Queen Mary II decided to make Kensington Palace (which, as we mentioned last week, was formerly known as Nottingham House) their home. Queen Mary oversaw the creation of a formal, Dutch-style garden featuring hedges and flower beds.

Queen Anne expanded the gardens after King William III’s death and commissioned landscape designers Henry Wise and George Loudon to create an English-style garden. She also ordered the construction of the Orangery which still stands to the north of the palace complex today (and houses a fine restaurant).

But it’s to Queen Caroline, wife of King George II, to whom Kensington Gardens owe its current form for it was she who in 1728, scythed off 300 acres of Hyde Park and employed Charles Bridgeman to create a new garden. His designs included damming the Westbourne stream to create the Long Water and the adjoining Serpentine in Hyde Park. He was also responsible for the creation of the Round Pond in front of the palace and, a landscape-history making move, used a ditch known as a ha-ha to separate the gardens from Hyde Park.

By the reign of King Charles II, the gardens had become fashionable for the elite to stroll in with the Broad Walk a popular promenade. But the gardens gradually fell from favour – a move exacerbated when Queen Victoria, who was born in Kensington Palace, moved to live at Buckingham Palace.

There were some changes made during the era, however. They included the creation of the ornamental Italian water gardens at the northern end of the Long Water and the Albert Memorial (see our previous story here) on the southern edge of the gardens.

Other highlights there today include the Peter Pan statue (see our earlier story on this), the Serpentine Gallery (with, in summer, a temporary pavilion), the Peter Pan-themed Diana, Princess of Wales Memorial Playground (opened in 2000), and the Elfin Oak, a stump which originally came from Richmond Park and is carved with tiny figures of woodland animals and fairies.

There’s also a statue of Queen Victoria directly outside of Kensington Palace which, interestingly, was sculpted by her daughter Princess Louise in celebration 50 years of her reign, as well as statues of Edward Jenner, creator of the small pox vaccine, and John Hanning Speke, discoverer of the Nile.

Other facilities include a cafe and, next to the magazine, an allotment.