It’s 70 years ago this November that a gorilla named Guy arrived at London Zoo and went on to become one of its most famous residents. 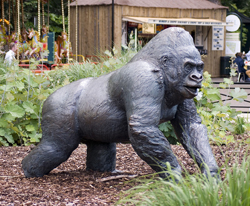 A Western lowland gorilla, Guy was captured as a baby in French Cameroon on behalf of the Paris Zoo which then exchanged him for a tiger from London Zoo. He arrived in London while still a baby, clutching a tin hot water bottle, on Bonfire Night – 5th November, 1947, hence his name ‘Guy’ (after Guy Fawkes).

Guy went on to become one of the zoo’s biggest stars (on a par with a contemporary, Chi-Chi the Giant Panda, another of the zoo’s most famous residents).

The giant ape, who lived for the latter part of his life in the zoo’s Michael Sobell Pavilion ( it opened in 1971), weighed some 240 kilograms and had a nine foot armspan but was known, despite his size and occasional outbreaks of bad temper, for having been a ‘gentle giant’ – there are stories that he used to hold out his hands and carefully examine small songbirds that flew into his cage before letting them go.

He was introduced to a mate, Lomie, after 25 years in solitude but they never produced any offspring.

Guy died in 1978 of a heart attack during a tooth extraction. He continues to attract sightseers, however – Guy was stuffed and put on display at the Natural History Museum in 1982. He was later moved into storage but went back on permanent display in 2012.

A bronze statue of Guy, by William Timym, can be seen near the zoo’s main entrance (pictured).