The oldest flyover in central London was actually built well before the first automobile.

Spanning the Fleet River valley, it was built between 1863 and 1869 and, spanning Farringdon Street below (which follows the line of the Fleet (now beneath the ground), it linked the City of London with Holborn (or more specifically Holborn with Newgate Street).

The flyover was designed by City of London surveyor William Heywood. It was part of a number of improvements designed to create better access to the City from the West End.

A number of old buildings and indeed some entire streets had to be demolished before construction could begin and thousands of bodies buried in St Andrew Holborn’s northern churchyard had to be relocated.

Made of cast iron, the flyover is about 1400 feet (425 metres) long and 80 foot (24 metres) wide and features three spans – the largest in the middle – supported on granite pillars.

Pavilions containing stairs allowing pedestrians to move between levels were built at either end on both sides of the roadway (the two northern buildings are both replacements – the previous versions were demolished after being damaged during the Blitz and have been replaced in more recent years).

There are also statues of winged lions and globe lamps (the current lamps are replicas with the originals thought to have been destroyed during the Blitz) as well as well as the City of London’s coat-of-arms and dragons.

Contained in a glass cabinet within the walls of St Sepulchre-without-Newgate, this bell was traditionally rung 12 times outside the condemned cell in nearby Newgate Prison at midnight on the eve of an execution (ensuring, no doubt, that no-one had a good night’s sleep before their final morning).

According to an inscription on the cabinet, the sexton of St Sepulchre – who reached the condemned cell from the church via a tunnel under the road – recited the following verse  (other sources have a longer a version thereof) while standing outside the cell:

“All you that in the condemned hole do lie,
Prepare you for tomorrow you shall die;
Watch all and pray: the hour is drawing near
That you before the Almighty must appear;
Examine well yourselves in time repent,
That you may not to eternal flames be sent.
And when St Sepulchre’s Bell in the morning tolls
The Lord above have mercy on your soul.”

The tradition of ringing the bell apparently dates from 1605 and has its origins in a bequest of £50 made by one Robert Dow(e), a prominent member of the Worshipful Company of Merchant Taylors. (Dow had apparently wanted a clergyman to be the one to ring the bell but his money didn’t stretch that far).

A rather grim piece of London’s history. 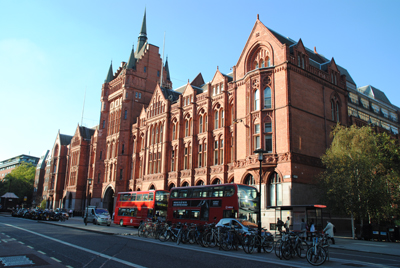 The origins of the name of this part of central London, to the west of the City, lie in the fact that the Fleet River runs through the area (albeit, since the 18th century, underground).

Mentioned as far back as the 950s, the name Holborn comes from the Old English “hol” or “holh” (“hollow”) and “burne” or “bourne” (“stream”) and means the “stream in the hollow” with the hollow in this case being the valley over which the Holborn Viaduct was built in the 1860s.

The term ‘Holburne’ was either used to refer to a tributary of the Fleet or part of the river itself. There was a bridge which apparently bore the same name and spanned either the Fleet or its tributary up until the river was covered.

The street now known as High Holborn – the main street in the area – was originally a Roman road and by the 19th century had become a centre for the entertainment industry featuring theatres, restaurants and pubs (including one of our favorites, the Cittee of Yorke).

The street is also home to the Holborn Bar, which marked the boundary of the City of London and was once site of a toll gate – it’s now the site of the Royal Fusilier’s War Memorial.

Other famous monuments in the area include an equestrian statue of Prince Albert – the City of London’s official statue of him – which was removed from its position in the centre of Holborn Circus in the east of the area to a new position on the western side of the intersection during a renovation last year.

The area is also home to the Inns of Court Lincoln’s Inn and Gray’s Inn and the Grade II*-listed Prudential Assurance Building (pictured above), constructed on the former site of Furnival’s Inn in the late 19th century/early 20th century, as well as Hatton Garden, famous for being the centre of London’s jewellery trade.

Located on a crossroads opposite the Old Bailey (or Central London Criminal Court as it’s formally known) and the Church of St Sepulchre-without-Newgate, The Viaduct Tavern is a gem of the Victorian era.

The name is relatively easy to explain – built in 1874 (and remodelled around the turn of the 19th century), the tavern lies just east of the Holborn Viaduct – central London’s first flyover – which opened in 1869.

The ornate interior of the Grade II-listed pub at 126 Newgate Street features etched and gilded glass panels, three representative “pre-Raphaelite-style” paintings – including one representing Industry and the Arts which was apparently shot by a soldier, no doubt the worse for wear from drink, celebrating the end of World War I – and a small cashier’s booth, all of which attest to its past as a Victorian gin palace.

Under the pub is a cellar – it’s commonly suggested these were cells were part of Newgate Prison (once located nearby on the site of the Old Bailey) or part of a debtor’s prison associated with Newgate – some believe it to have been the site of the Giltspur Street Compter, but both stories have been disputed by guide Peter Berthould.

Past patrons of the pub – which is reputedly haunted – are said to have included writer Oscar Wilde, who apparently frequented the tavern during his trials over the road in the late 1800s.

The pub is now part of the Fullers chain.

A rather humble looking fountain set into the railing outside the Church of St Sepulchre-without-Newgate at the corner of Giltspur Street and Holborn Viaduct, it’s easy to overlook this important part of London’s historic fabric. 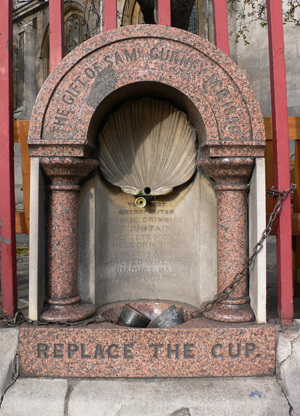 But this free water fountain is London’s oldest and was installed here on 21st April, 1859, by the then Metropolitan Drinking Fountain Association. Established by Samuel Gurney – an MP and the nephew of social reformer Elizabeth Fry, the organisation aimed to provide people with free drinking water in a bid to encourage them to choose water over alcohol.

Within two years of the fountain’s creation, the organisation – which later changed its name to Metropolitan Drinking Fountain and Cattle Trough Association in reflection of its expanded role in also helping animals – had placed as many as 85 fountains across London.

Such was the need for a clean water supply that, according to the Drinking Fountain Association, as many as 7,000 people a day used the fountain when it was first installed.

The fountain on Holborn Hill was removed in 1867 when the nearby street Snow Hill was widened during the creation of the Holborn Viaduct and the rails replaced but it was returned there in 1913. Rather a poignant reminder of the days when water wasn’t the publicly available resource it is today, the marble fountain still features two small metal cups attached to chains for the ease of drinking and carries the warning, “Replace the Cup!”.

Twice Lord Mayor of London, Sir William Walworth is best remembered as the man who killed the leader of the Peasant’s Revolt, Wat Tyler.

Believed to have been born in the first half of the 14th century to a couple in Durham, Walworth at some point moved to London where he was apprenticed to the leading fishmonger John Lovekyn (he was also one of London’s biggest exporters of wool).

In 1368, following Lovekyn’s death, Walworth replaced Lovekyn as the alderman of Bridge Ward. Two years later, in 1370, he was elected sheriff and the following year he became an MP (by this stage, he was also already a major lender of money to the crown). Walworth was first elected as mayor in 1374, elected again as an MP in 1377, and again as mayor in 1380.

It was on 13th June, 1381, Walworth, still London’s mayor, led the defence of London Bridge against Wat Tyler and the rebels. He was later with the king, Richard II, when he subsequently met with Tyler and others at Smithfield. During that encounter Walworth stabbed Tyler and killed him, either outright or as a result his wounds. The reason for the killing remains unclear.

Walworth was knighted on the field for his efforts in defending the king during the rebellion and was later involved in restoring the peace in London and in the counties of Kent and Middlesex.

Sir William did marry but he and his wife Margaret, who died in 1394, had no children. Following his death in 1386 at his house in Thames Street (later the Fishmonger’s Hall), he was buried at the church of St Michael, Crooked Lane, to which he had already made some substantial donations.

He subsequently became a hero in popular story-telling and in 1592 was included in Richard Johnson’s book Nine Worthies of London. A wooden statue of him was placed at the Fishmonger’s Hall in 1685. There is a much later statue of Sir William on the Holborn Viaduct (pictured).

In the first of a series in Famous Londoners looking at past mayors of London, we profile the first person recorded as having that title, Henry Fitz-Ailwyn (also known as Henry Fitz-Ailwin). While his name might not be familiar to us today, it’s clear than in the 12th century, he was a personage to be reckoned with.

Believed to have been born in the 1130s or 40s, Fitz-Ailwyn is said to have been the son of a wealthy Londoner. Apparently involved in the cloth trade, possibly as a draper, he owned property in several counties and in what was Candlewick Street in London (now named Cannon Street).

Records show he was a London alderman in 1168 and later served as mayor, thanks apparently to the support of King Richard I (the dates are uncertain – some claim he took up the post in 1194 but the City of London Corporation records his tenure as 1189 to 1211).

Among his claims to fame are that he issued London’s first building regulations (concerning the need to build in stone) after a fire in 1212 destroyed parts of the city (although he apparently had no powers to enforce them).

Fitz-Ailwyn died the same year and is noted by the Museum of London as “the only mayor ever to serve in office for a full life term”.

His name is commemorated in a window at the Guildhall and by a statue which stands on the exterior of one of the step buildings at Holborn Viaduct (pictured).