This month marks 150 years since the last public hanging in London (and, indeed, in Britain). It took place outside Newgate Prison and involved a Fenian (Irish nationalist) bomber named Michael Barrett.

Barrett had been arrested following the bombing of the Clerkenwell House of Detention in 1867 which, in a botched effort to free another Fenian, Richard O’Sullivan Burke, a number of bystanders were killed. Barrett’s case was a controversial one (he was the only one of six people to stand trial for the crime who was convicted) and his execution apparently postponed twice because of questions over his guilt. 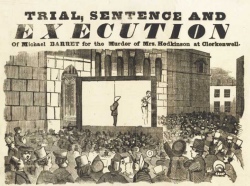 The crowd at the hanging on the morning of 26th May, 1868, was said to be large – a “great surging mass” (indeed, such was the interest that seats in nearby houses were said to have sold for £10) – but described in The Times as “unusually orderly”.

“With the first sound of the bells came a great hungry roar from the crowd outside, and a loud, continued shout of ‘Hats off’, till the whole dense, bareheaded mass stood white and ghastly-looking in the morning sun, and the pressure on the barriers increased so that the girls and women in the front ranks began to scream and struggle to get free,” the newspaper reported.

“Amid such a scene as this, and before such a dense crowd of white faces, Barrett was executed…To neither cheers nor hisses did the culprit make the slightest recognition. He seemed only attentive to what the priest was saying to him, and to be engaged in fervent prayer. The hangman instantly put the cap over his face and the rope round his neck. Then Barrett turning spoke through his cap and asked for the rope to be altered, which the hangman did. In another moment Barrett was a dead man…He died without a struggle. It is worthy of remark that a great cry rose from the crowd as the culprit fell – a cry which was neither an exclamation nor a scream, but it partook in its sound of both.”

The hanging was carried out by William Calcraft, the orphaned son of an Essex farmer who many years earlier had found what was to be an almost life-long calling when, apparently while selling pies at a hanging he was noticed by his predecessor in the job and became his apprentice before taking in the job himself in 1829.

Calcraft, who was known for his use of controversial ‘short drops’ which meant the condemned would slowly strangle to death rather than have their necks broken, was to preside over the last public hanging – of Barrett – as well as the first private hanging inside Newgate – of 18-year-old murderer Alexander Mackay in September, 1868 – before eventually retiring in 1874 and dying shortly after.

Barrett, meanwhile, was buried under the ‘Birdcage Walk’ (also known as ‘Dead Man’s Walk’), the stone corridor which linked the prison with the Old Bailey. His body was transferred to the City of London Cemetery in 1903 as Newgate was demolished. The grave is marked with a plaque commemorating his place in history.

PICTURE: Image from an “execution broadside” of Barrett’s hanging in 1868. These were commonly sold at public executions in the 18th and 19th centuries.

Located on a crossroads opposite the Old Bailey (or Central London Criminal Court as it’s formally known) and the Church of St Sepulchre-without-Newgate, The Viaduct Tavern is a gem of the Victorian era. 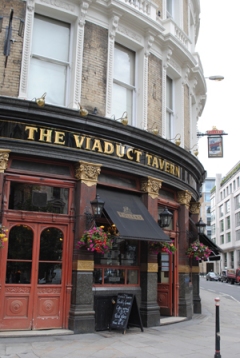 The name is relatively easy to explain – built in 1874 (and remodelled around the turn of the 19th century), the tavern lies just east of the Holborn Viaduct – central London’s first flyover – which opened in 1869.

The ornate interior of the Grade II-listed pub at 126 Newgate Street features etched and gilded glass panels, three representative “pre-Raphaelite-style” paintings – including one representing Industry and the Arts which was apparently shot by a soldier, no doubt the worse for wear from drink, celebrating the end of World War I – and a small cashier’s booth, all of which attest to its past as a Victorian gin palace.

Under the pub is a cellar – it’s commonly suggested these were cells were part of Newgate Prison (once located nearby on the site of the Old Bailey) or part of a debtor’s prison associated with Newgate – some believe it to have been the site of the Giltspur Street Compter, but both stories have been disputed by guide Peter Berthould.

Past patrons of the pub – which is reputedly haunted – are said to have included writer Oscar Wilde, who apparently frequented the tavern during his trials over the road in the late 1800s.

The pub is now part of the Fullers chain.

Better known now as the name for the infamous former prison which whom its history is intertwined, Newgate was originally one of the seven principal gates of London and, like five others, originally dates back to Roman times. 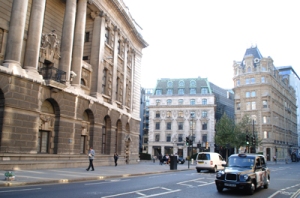 The gate, which apparently took the name ‘new’ thanks to a rebuild in the early medieval era, possibly in the reign of King Henry I or King Stephen, was located close to where the street known as Newgate meets the Old Bailey (see picture – there’s a blue plaque marking the spot on Newgate).

It was used as a prison from the 12th century for housing debtors and felons  – in the 13th century King Henry III is recorded as having issued orders for the prison’s repair (You can see our earlier entry on the prison here.)

The gate’s prison function – this was really no more than a few ‘cells’ – was substantially added to in the 1420s when, apparently as required under the terms of former Mayor Richard Whittington’s will, the gate was rebuilt and a new prison building was constructed to the south on what is now the site of the Old Bailey (home of the Central Criminal Court).

The gate was eventually demolished in the mid 18th century apparently due to urban planning issues. The prison, meanwhile, continued to be used until 1902 and was finally pulled down two years later.

We’re launching a new ‘Lost London’ special looking at some of the now disappeared gates of London. First up is Ludgate which once stood on the western side of the city.

The gate is believed to have been constructed in Roman times and is known to have been rebuilt a several times – once in 1215 and another time after it was destroyed in the Great Fire – before being demolished in 1760 to allow for the road to be widened.

The origins of the name – which is today commemorated in street names like Ludgate Hill and Ludgate Circus – are sketchy but may have been named after the mythical pre-Roman King Lud, who was, so the legend goes, buried underneath this portal (this myth was popularised by the 12th century writer Geoffrey of Monmouth). Others have suggested ‘lud’ is a corruption of ‘flud’ or ‘flood’ and the gate was so named because it prevented the city being flooded by the River Fleet. Another possibility is that ‘lud’ is simply an old English word for a postern gate, a small secondary gate.

Whatever the origins of its name, it has been suggested it was through Ludgate that William the Conqueror passed when first entering the city. In 1377 it became a prison for petty criminals like debtors and trespassers – serious criminals were sent to Newgate – and this lasted until its final destruction.

There is a blue plaque on the wall of the church of St Martin-within-Ludgate in Ludgate Hill marking where Ludgate once stood (pictured above). It is believed that some badly corroded statues standing under a porch at the church of St Dunstan-in-the-West on Fleet Street are of Lud and his sons and were taken down from the gate before its demolition. William Kerwin’s statue of Queen Elizabeth I which dates from 1586 sits in a niche on the front of the church is also believed to have been removed from Ludgate.

The favoured place to dispatch pirates, Execution Dock was located on the north bank of the River Thames just off Wapping High Street.

Among the most famous to be executed here was Kidd himself who, having been found to have turned pirate while operating as a privateer under the authority of King William III, was hanged here on 23rd May, 1701.

The site, near where a cannon foundry operated supplying the fleet of King Henry VIII, was in-use as an execution ground for more than 400 years, from the 15th century until the last hanging in 1830 (that of pirates George Davis and William Watts).

Those convicted of piracy in the High Court of Admiralty were typically brought to Execution Dock from Marshalsea Prison (or in some cases from Newgate) in a procession across London Bridge and past the Tower of London which was led by the Admiralty Marshal or his deputy who carried a silver oar as a symbol of their authority.

In a public spectacle, the pirates were then hanged on a wooden scaffold built at low tide but unlike at other sites of execution where they were cut down after death, the victims were left hanging to allow three tides to wash over them.

The most notorious of the pirates would then be tarred and put in a gibbet to be exhibited on one of the banks of the Thames as a warning to others (Kidd’s remains were apparently left in such a state for more than 20 years at Tilbury).

The exact location of Execution Dock remains a matter of dispute with favoured locations including a spot near the Town of Ramsgate pub, just along from The Captain Kidd pub near what are now known as King Henry’s Stairs and, between the two locations, a warehouse which stands on the waterfront and is prominently marked with an E (for Execution Dock). Some even suggest the site was outside the Prospect of Whitby pub further east along Wapping High Street.

There’s currently an exhibition on Captain Kidd at the Museum of London Docklands, Pirates: The Captain Kidd Story.  See here for more information.