OK, so the debate may continue over whether Sweeney Todd was an actual person (according to author Peter Haining, the real Todd, born in Brick Lane, is supposed to have been hanged in 1802) or a fictional character, but, suspending that debate for the moment, we’re including the infamous Fleet Street barber in this list. 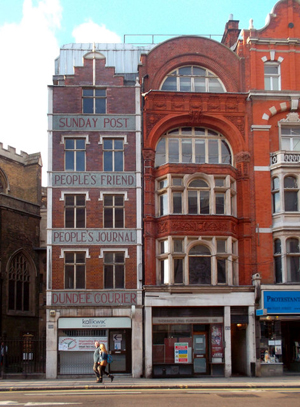 Known as the “demon barber of Fleet Street”, Todd first appeared in literature as a murderer in the Victorian serial, The String of Pearls: A Romance, published in a weekly periodical, and soon became a staple of the Victorian theatre, later appearing in numerous plays and films including the 2007 Johnny Depp vehicle, Sweeney Todd.

His MO usually involved cutting his unsuspecting victim’s throat and then, using a specially constructed barber’s chair, dropping the body into the cellar. There, he and his associate, Mrs Lovett, would rob them (alternatively, other versions have him dropping the customers into the cellar first and then, if needed, finishing them off).

Mrs Lovett would then dispose of the remains by baking them into pies and selling them via her pie shop located nearby in Bell Yard. The story goes that the cellar was linked to nearby Bell Yard via tunnels.

Sweeney Todd was supposed to have terrorised London in the late 18th century and his barber shop was apparently located at 186 Fleet Street in London – right next to St Dunstan-in-the-West. The site is now occupied by a former newspaper office – that of the Dundee Courier (pictured above, left).

For Peter Haining’s book on Sweeney Todd, see Sweeney Todd: The Real Story of the Demon Barber of Fleet Street

• The true story of Captain Kidd and an exploration of London’s links with piracy is the focus of a new major exhibition at the Museum of London Docklands. Pirates: The Captain Kidd Story features original artefacts dating from 300 years ago when London was a site of pirate executions and tells the story of the infamous Captain Kidd’s life until his execution at Wapping’s Execution Dock. Among the artefacts is the original costume worn by actor Johnny Depp as he played Captain Jack Sparrow in the film Pirates of the Caribbean. The exhibition, which opens tomorrow and runs until 30th October, is being held in conjunction with a series of pirate related events including an adults-only pirate night on 27th May where you have the chance to sample some genuine “pirate drink” and take part in pirate speech lessons. Admission charges apply. For more information, visit the Museum of London Docklands website www.museumoflondon.org.uk/Docklands/Whats-on/Exhibitions-Displays/Pirates.htm.

• The path of London’s Olympic Torch Relay has been announced and will finish with a week long jaunt through London. The torch will arrive in Waltham Forest on 21st July next year and then pass through Bexley, Wandsworth, Ealing, Haringey and Westminster before its arrival at the Olympic Stadium on 27th July. To find out how to nominate someone to carry the torch or for more information on the relay, visit www.london2012.com/olympic-torch-relay.

• On Now: London’s Underworld Unearthed: the Secret Life of the Rookery. The seedy side of the St Giles Rookery, a once infamous quarter of the capital, is laid bare in this new exhibition at the Coningsby Gallery. Back in 1751, the area was known as “a pit of degradation, poverty and crime” known for its free-flowing gin. Artist Jane Palm-Gold has displayed 18th and 19th century artifacts found during the Museum of London Archaeology’s recent excavation of old St Giles (conducted prior to the construction of the recent Central St Giles development which now covers the site) alongside her paintings, building what has been described as a “multi-layered psycho-geography that both mesmerises and disturbs”. Runs until 3rd June at the Coninsby Gallery at 30 Tottenham Street (nearest tube station is Goodge Street). Admission is free. For more information, see www.coningsbygallery.com

• Australian speech therapist Lionel Logue – known for having helped cure King George VI of his stammer, the story of which is told in the recent Oscar-winning film, The King’s Speech – has been honored with a green plaque by Westminster Council. The plaque was expected to be unveiled today at 146 Harley Street, where Logue, who is known to have used fees from wealthier client to subsidise free treatments for those who could not afford them, lived from 1926 until 1952. The plaque is one of 94 which Westminster Council has placed to mark buildings of particular significance for their association with people who have made lasting contributions to society.

• On Now: The Seven Seas at Selfridges in Oxford Street. Conceptual artist Beth Derbyshire’s seven minute video installation features seven films of seven different seas around the globe. On show as part of Project Ocean – an initiative by Selfridges and 20 environmental and conservation groups aimed at celebrating the ocean’s beauty and highlighting the issue of overfishing. Runs until 8th June. For more information, see www.selfridges.com.