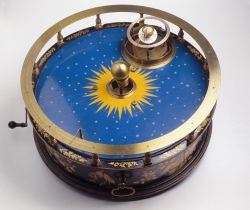 • The biggest ever exhibition exploring the Sun opens at the Science Museum in South Kensington this Saturday. The Sun: Living With Our Star features everything from Nordic Bronze Age artefacts revealing ancient beliefs about how the Sun was transported across the sky to details of upcoming NASA and European Space Agency solar missions. Highlights include the original ‘orrery’ (pictured), an instrument made for the Earl of Orrery in 1712 to demonstrate the motions of the Earth and Moon around the Sun, a rare concave mirror known as a yang-sui which was used for lighting fires in China and dates to between 202 BCE and 9 CE, and a Tokomak ST25-HTS, a prototype nuclear fusion reactor which successfully created and sustained plasma for a record-breaking 29 hours in 2015. There’s also an astronomical spectroscope made for Norman Lockyer, founder of the Science Museum, who used it to identify the element helium in 1868 – the exhibition actually coincides with the 150th anniversary of Lockyer’s discovery, the first of an “extra-terrestrial” element. The exhibition also includes interactive experiences including a huge illuminated wall display allowing visitors to see the Sun rise in different seasons and locations and another in which visitors are able to bask in the sun while sitting in deck chairs under palm trees with sand at their feet. Runs until 6th May next year. Admission charge applies. The exhibition is being accompanied by a programme of events including “family festivals” in early November and early March. For more, see www.sciencemuseum.org.uk/see-and-do/the-sun-living-with-our-star. PICTURE: Science Museum Group Collection/© © The Board of Trustees of the Science Museum.

• The story of Charles Darwin is told in a new two hour stage play featuring a cast of seven people and 30 hand-made puppets which opened at The Natural History Museum this week. The Wider Earth, which follows Darwin as he sets out on a daring five year journey aboard the HMS Beagle through uncharted landscapes, is being staged in the museum’s Jerwood Gallery following sold-out seasons in Australia and represents the first time a performance-based theatre has been constructed in the museum. Presented by Trish Wadley Productions and Dead Puppet Society in association with Glass Half Full Productions, the show runs until 30th December. To book tickets, head to www.thewiderearth.com.

• This year marks 80 years since Sigmund Freud and Salvador Dalí famously met in London on 19th July, 1938 – a meeting at which Dalí revealed to Freud his recently completed painting The Metamorphosis of Narcissus. The Freud Museum has launched a new exhibition – Freud, Dalí and the Metamorphosis of Narcissus – which explores the extensive influence of Freud on Dalí and on Surrealism as well as Freud’s own reaction to the painting. The painting forms the centrepiece of the exhibition which also includes drawings, photographs and prints as well as documents including letters, manuscripts, books and Freud’s appointment diary. The display is accompanied by a programme of events. Runs until 24th February. Admission charge applies. For more, see www.freud.org.uk.

• The “invaluable” role artists from abroad played in the development of British medallic art is the focus of a new display at the British Museum. Witnesses: émigré medallists in Britain features medals from six centuries documenting significant historical moments and commemorating famous British figures. The earliest objects date from Elizabethan England when Dutch artist Steven van Herwijck introduced the art of the medal to Britain’s cultural elite while ‘stars’ in the display include a spectacular Waterloo medal conceived by 19th century Italian gem engraver Benedetto Pistrucci which took 30 years to complete and bears the image of the four allied sovereigns – George, Prince Regent, Francis II of Austria, Alexander I of Russia and King Frederick William III of Prussia. The free display can be seen in Room 69a until 7th April next year. For more, see www.britishmuseum.org. PICTURE: Benedetto Pistrucci: Coronation of George IV, 1821, gold, 35mm. © the Trustees of the British Museum M5716. B, 1070. CME6436.

• The Science Museum is commemorating 70 years of India’s independence with Illuminating India, a season of exhibitions, specially commissioned artworks and events telling the stories of Indian innovators and thinkers who have often been overlooked or written out of Western versions of history. The exhibition Illuminating India: 5000 Years of Science and Innovation celebrates India’s central role in the history of science and tech by surveying its contributions to subjects ranging from space exploration to mathematics, communication and engineering while Photography 1857-2017 is the first exhibition to provide a survey of photography from its beginnings in India in the mid-19th century through to the present day and pivots around two key dates in India’s history – 1857 and 1947. Alongside the exhibitions, artist Chila Kumari Burman has been commissioned to create a special series of artworks and there is a comprehensive program of related public events, some of which are free. The Illuminating India season runs until 31st March. For the full programme of events, head to www.sciencemuseum.org.uk/indiaseason. 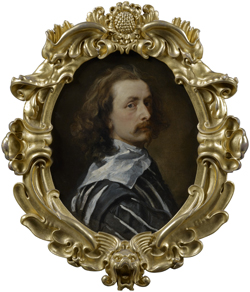 • To mark the return of Sir Anthony van Dyck’s self-portrait (pictured) to the National Portrait Gallery after a three year nationwide tour, contemporary artist Julian Opie has been invited to present his works in dialogue with the painting. Julian Opie After Van Dyck features new and recent works including Faime (2016), Lucia, back 3 (2017) and Beach head, 6 (2017). The free display in the seventeenth century galleries opens tomorrow and runs until 7th January. It’s the final of three displays held in the gallery as part of the three year tour following the purchase of the Van Dyck self-portrait, painted in about 1640, in 2014. For more, see www.npg.org.uk. PICTURE: National Portrait Gallery.

• The friendship and works of Salvador Dali and Marcel Duchamp are explored in a new exhibition opening at the Royal Academy tomorrow. Dali/Duchamp features more than 80 paintings, sculptures, “readymades”, photographs, drawings, films and archival material and is organised into three thematic sections – ‘Identities’, ‘The Body and the Object’ and, ‘Experimenting with Reality’. Among the highlights is Duchamp’s The King and Queen Surrounded by Swift Nudes (1912), Fountain (1917/1964), and The Bride Stripped Bare by her Bachelors, Even (The Large Glass) (1915), as well as Dali’s The First Days of Spring (1929), Lobster Telephone (1938) and Christ of Saint John of the Cross (c1951). Runs until 3rd January and then moves to The Dali Museum in St Petersburg, Florida. Admission charge applies. For more, see www.royalacademy.org.uk.

• The first tranche of tickets to see this year’s New Years Eve fireworks event over the River Thames in central London were released late last week. The display will feature more than 12,000 fireworks, and involve 2,000 lighting cues and 30 tonnes of equipment on three barges (and, despite the renovation work, the New Year will still be rung in by the bongs of Big Ben!). The tickets, which are available for £10 each, provide access to a range of specific areas – some of these are already sold out. The full cost of the tickets goes towards costs associated with the ticketing system. People can book up to four tickets at www.london.gov.uk/nye.

• It’s Shakespeare month at St Paul’s Cathedral as the august London institution hosts a series of special addresses and music recitals in honour of the Bard’s 450th birthday. Kicking off this weekend, the events will see preachers considering Shakespeare’s life and work – particularly in relation to faith – in a weekly address at Sunday Evensong service while a series of voice and piano recitals will present various interpretations of his work through the music of some of Britain’s greatest composers. Shakespeare, the cathedral staff say, would have known the cathedral well – many printers, including his old Stratford friend Richard Field, were located in the Churchyard, and Shakespeare would have had to regularly journey past St Paul’s to have his plays registered at St John’s Gate. See www.stpauls.co.uk for a detailed programme of events.

• The Kensington Gardens Allotment is hosting a free Harvest Festival this Sunday with activities including digging up potatoes and making ‘potato people’ as well as face painting, story telling and a mobile pet farm. Complementary hot and cold drinks will be provided (while stocks last, so don’t be late!). The day runs from 11am to 4pm. Meanwhile, Regent’s Park Allotment Gardens will host its own Harvest Festival on Sunday, 21st September. Along with live folk music, a children’s treasure hunt and the ‘guess the weight of the pumpkin’ competition, the day will also feature a specially-built pizza oven in which visitors will be invited to cook their own pizza. For more, see www.royalparks.org.uk.

• The works of renowned 20th century photographer Horst P Horst (1906-1999) will feature in a new exhibition opening at the V&A in South Kensington this Saturday. Horst: Photographer of Style will feature 250 photographs alongside haute couture garments, magazines, film footage and other ephemera and explores Horst’s collaborations and friendships with the likes of Coco Chanel, Marlene Dietrich, Noel Coward and Salvador Dali. Highlights include previously unpublished prints and more than 90 Vogue covers taken by Horst. Runs until 4th January. Admission charge applies. For more, see www.vam.ac.uk/horst.

• Chinese New Year celebrations will go off with a bang in Chinatown in the West End this Saturday. The festivities, which are the largest outside Asia, will include a lion dance, fireworks, and a variety of performers – all gathered to herald the start of the Year of the Snake. The celebrations will kick off with a parade which will leave Trafalgar Square at 10am and end at Rupert Street in Chinatown at 11am. At 12pm, dignitaries will gather in Trafalgar Square for the Dotting of the Eye ceremony which will bring the dragons and lions to life and performances will the take place until 5.30pm. At 5.55pm a fireworks display will mark the end of the day’s celebrations. For more, see www.chinatownlondon.org/page/chinese-new-year-2013/378.

• Like orchids? Want to escape the gloom of winter? Kew Gardens are celebrating the exotic plant with a dazzling display in the Princess of Wales Conservatory. Thousands of orchids will be on show as part of ‘Orchids at Kew’ and the plants will be used to recreate the giant waterlily flower, Victoria amazonica, which can normally be seen in the conservatory in the summer months. There are special behind the scenes tours, food and an adult education course for the truly interested. Charges apply. Opening on Saturday, 9th February, the display can be seen until 3rd March. For more, see www.kew.org.

• The late artist Lucian Freud has donated a treasured portrait – Jean-Baptiste Camille Corot’s L’Italienne ou La Femme à la Manche Jaune (The Italian Woman, or Woman with Yellow Sleeve) – to the nation in gratitude for the welcome his family received when they arrived as refugees from Berlin. The Corot has been allocated to the National Gallery by the Arts Council England and was done under the Acceptance in Lieu scheme, which allows people to transfer works of art into public ownership instead of paying inheritance tax.  The painting – which was last seen in a show at the Louvre, Paris, in 1962, and was previously owned by Hollywood Golden Age star Edward G. Robinson – is on display on Room 41 of the gallery. For more, see www.nationalgallery.org.uk.

• On Now: Man Ray Portraits. The first museum exhibition to focus on the photographic portraiture of the 20th century artist Man Ray, this display at the National Portrait Gallery features more than 150 vintage prints taken between 1916 and 1968. Subjects include everyone from Catherine Deneuve and Ava Gardner to Salvador Dali and Aldous Huxley. The majority of works have never been exhibited in the UK before. Runs until 27th May. Admission charge applies. For more, see www.npg.org.uk.

Like to tell others about your upcoming event in London? If you’ve got an event coming up, please send any press releases or details to exploringlondon@gmail.com.