• The biggest ever exhibition exploring the Sun opens at the Science Museum in South Kensington this Saturday. The Sun: Living With Our Star features everything from Nordic Bronze Age artefacts revealing ancient beliefs about how the Sun was transported across the sky to details of upcoming NASA and European Space Agency solar missions. Highlights include the original ‘orrery’ (pictured), an instrument made for the Earl of Orrery in 1712 to demonstrate the motions of the Earth and Moon around the Sun, a rare concave mirror known as a yang-sui which was used for lighting fires in China and dates to between 202 BCE and 9 CE, and a Tokomak ST25-HTS, a prototype nuclear fusion reactor which successfully created and sustained plasma for a record-breaking 29 hours in 2015. There’s also an astronomical spectroscope made for Norman Lockyer, founder of the Science Museum, who used it to identify the element helium in 1868 – the exhibition actually coincides with the 150th anniversary of Lockyer’s discovery, the first of an “extra-terrestrial” element. The exhibition also includes interactive experiences including a huge illuminated wall display allowing visitors to see the Sun rise in different seasons and locations and another in which visitors are able to bask in the sun while sitting in deck chairs under palm trees with sand at their feet. Runs until 6th May next year. Admission charge applies. The exhibition is being accompanied by a programme of events including “family festivals” in early November and early March. For more, see www.sciencemuseum.org.uk/see-and-do/the-sun-living-with-our-star. PICTURE: Science Museum Group Collection/© © The Board of Trustees of the Science Museum.

• The story of Charles Darwin is told in a new two hour stage play featuring a cast of seven people and 30 hand-made puppets which opened at The Natural History Museum this week. The Wider Earth, which follows Darwin as he sets out on a daring five year journey aboard the HMS Beagle through uncharted landscapes, is being staged in the museum’s Jerwood Gallery following sold-out seasons in Australia and represents the first time a performance-based theatre has been constructed in the museum. Presented by Trish Wadley Productions and Dead Puppet Society in association with Glass Half Full Productions, the show runs until 30th December. To book tickets, head to www.thewiderearth.com.

• This year marks 80 years since Sigmund Freud and Salvador Dalí famously met in London on 19th July, 1938 – a meeting at which Dalí revealed to Freud his recently completed painting The Metamorphosis of Narcissus. The Freud Museum has launched a new exhibition – Freud, Dalí and the Metamorphosis of Narcissus – which explores the extensive influence of Freud on Dalí and on Surrealism as well as Freud’s own reaction to the painting. The painting forms the centrepiece of the exhibition which also includes drawings, photographs and prints as well as documents including letters, manuscripts, books and Freud’s appointment diary. The display is accompanied by a programme of events. Runs until 24th February. Admission charge applies. For more, see www.freud.org.uk.

• The “invaluable” role artists from abroad played in the development of British medallic art is the focus of a new display at the British Museum. Witnesses: émigré medallists in Britain features medals from six centuries documenting significant historical moments and commemorating famous British figures. The earliest objects date from Elizabethan England when Dutch artist Steven van Herwijck introduced the art of the medal to Britain’s cultural elite while ‘stars’ in the display include a spectacular Waterloo medal conceived by 19th century Italian gem engraver Benedetto Pistrucci which took 30 years to complete and bears the image of the four allied sovereigns – George, Prince Regent, Francis II of Austria, Alexander I of Russia and King Frederick William III of Prussia. The free display can be seen in Room 69a until 7th April next year. For more, see www.britishmuseum.org. PICTURE: Benedetto Pistrucci: Coronation of George IV, 1821, gold, 35mm. © the Trustees of the British Museum M5716. B, 1070. CME6436. 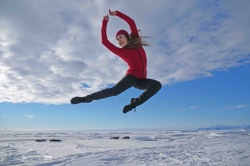 • A free dance and science festival celebrating Antarctica opens at the Science Museum in South Kensington on Tuesday. Antarctica Live features daily dance performances – including a newly devised performance by award-winning choreographer Corey Baker, workshops and hands-on experiences with real survival equipment to shed light on how the frozen continent is responding to increasing human activity and how its fate can affect us all. Visitors will also be able to see a scale model of the recently launched polar research vessel, the RRS Sir David Attenborough. A special “lates” event on 29th August in the museum’s IMAX Theatre will premiere the documentary film Dancing on Icebergs, which charts the two year making of the short film, Antarctica: The First Dance, featuring Madeleine Graham, star of the Royal New Zealand Ballet (pictured). The screening will be followed by a live Q&A with Corey Baker. Antarctica Live runs until 30th August. For more, see www.sciencemuseum.org.uk/see-and-do/antarctica-live. PICTURE: Madeleine Graham in Antarctica The First Dance © Jacob Bryant.

• On Now: Leaving Today – the Freuds in Exile 1938. This exhibition at the Freud Museum London in Hampstead focuses on the flight and exile of Sigmund Freud, his wife Marta and daughter Anna as, following Hitler’s annexation of Austria, they left Vienna on 4th June, 1938, heading to a new life in London. It features original documents, letters and objects, many of which have never been on public display before. Highlights included the documents Freud and his family required to exit Austria and enter Britain, Freud’s personal correspondence with figures like Albert Einstein and HG Wells, and the first public display of Marie-Louise von Motesiczky’s painting The Psychoanalyst. The exhibition also features a series of works created by young people attending the Baobab Centre for Young Survivors in Exile in collaboration with Barnaby Barford. Runs until 30th September. Admission charge applies. For more, see www.freud.org.uk.

The fact the properties can have many residents with the passing of the years means that there’s a select number of properties in London (18 to be exact) which bear more than one English Heritage blue plaque – among them 4 Carlton Gardens in St James’s (home to 19th century PM Lord Palmerston and where General Charles De Gaulle set up the headquarter of the free French forces in 1940).

But among that group is an even more select group – properties which bear two blue plaques with both of those people commemorated coming from the same family.  The home at 20 Maresfield Gardens in Hampstead (pictured above) falls into this group.

Now a museum, the home’s celebrated occupants have included psycho-analyst Sigmund Freud, who lived here briefly in the final years of his life (between 1938 and his death on 23rd September, 1939), and his daughter Anna Freud, the youngest of his six children and herself a pioneering psycho-analyst, who lived here from 1938 until her death in 1982.

Both occupants have their own blue plaques on the property: Sigmund’s original London County Council blue plaque was unveiled on the site by his daughter Anna – then still occupant in the home – in 1956, the 100th anniversary of his birth. It had deteriorated and was replaced in 2002, at the same time a plaque to Anna herself was unveiled.

When Freud had moved to London from Vienna in June, 1938 – following the annexation of Austria by the Third Reich, he had initially lived in Primrose Hill before settling in the property in Maresfield Gardens along with his family and a significant collection of furniture from his Vienna consulting rooms.

In 1986, four years after Anna’s death, property was reopened as the Freud Museum and the public can still go inside and see Freud’s study, including his famed consulting couch, just as it was when he lived there.

The Freuds aren’t, of course, the only family members commemorated by English Heritage Blue Plaques – others include suffragette mother and daughters Emmeline and Christabel and Sylvia Pankhurst (the first two commemorated on a single plaque at 50 Clarendon Road in Notting Hill and the latter at 120 Cheyne Walk in Chelsea), and father and son Prime Ministers William Pitt the Elder and his son William Pitt the Younger (at 10 St James’s Square in St James’s and 120 Baker Street in Marylebone respectively). 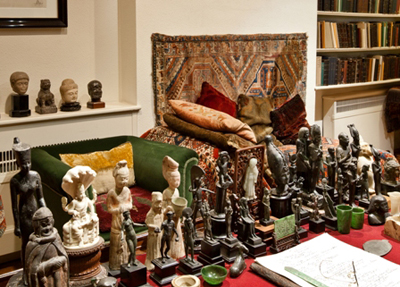 This group of antiquities sits upon the desk of Sigmund Freud – the “founding father” of psychoanalysis –  at what was his home in Hampstead.

It’s part of an extensive collection of around 2,000 items which is on display at house – now the Freud Museum – located at 20 Maresfield Gardens.

The antiquities – which include Egyptian, Greek, Roman, and Oriental artefacts fill a series of cabinets and sit on almost every available surface in Freud’s study including the desk upon which Freud typically wrote until the early hours of the morning.

Collected by Freud from the 1890s onward, they include everything from a bronze statuette of the Greek goddess Athena (dating from the 1st or 2nd century AD – it’s mentioned in one of his manuscripts and, one of Freud’s favorite objects, was one of only three items he chose to have smuggled out of Vienna when his entire collection was threatened in 1938), a small bronze head of the Egyptian God Osiris believed to date from between 1075-716 BC, and a silver Roman ring featuring a blue glass intaglio depicting a pastoral scene which dates from between the 1st century BC and the 1st century AD (it was given as a gift from Freud to German psychoanalyst Ernst Simmel in 1928).

The museum has launched a conservation fund to repair and conserve the most fragile of the items and is aiming to raise £40,000 for the work. It follows a successful campaign earlier this year to raise funds for the conservation of Freud’s famous couch, brought from his former home in Vienna (seen in the background of this image).

Freud and his family lived at the home after escaping from Austria following the country’s annexation by Nazi Germany in 1938. It remained the family home until the death of Freud’s daughter, Anna, in 1982. The museum opened to the public in 1986.

PICTURE: Courtesy of the Freud Museum.