Over the past couple of months our special Wednesday series has looked at “10 small, ‘secret’ and historic gardens in central London”. So we’re finishing the series by taking a quick look back at the 10 gardens we featured (and providing a single point where you can find any you may have missed)…

Do you have a favourite? Or maybe there’s a ‘small, secret and historic’ garden we didn’t mention that you love (and we may mention in a future special)?

Back into the City of London this week and it’s another garden located on the site of a former church.

Situated just off Cannon Street, this much overlooked tiny raised garden was created on the site of the former Church of St Swithin. The church is believed to have existed here as early as the 11th century and was replaced, thanks largely to the generosity of Lord Mayor Sir John Hind, with a larger building in the early part of the 15th century – it featured one of the first towers built specifically for the task of hanging bells inside. 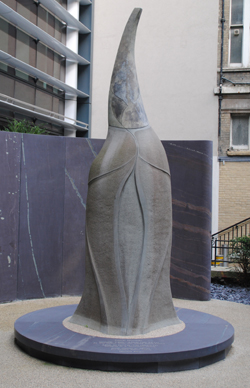 The church was among those destroyed in the Great Fire of London in 1666 but, now united with the parish of St Mary Bothaw, was rebuilt to the designs of Sir Christopher Wren shortly after in 1677-88.

Later known as St Swithin, London Stone thanks to the mysterious London Stone being built into the south wall of the church in the late 18th century (for more on the stone and its current location, see our earlier post here), the church survived until World War II when it was damaged beyond repair during bombing and was later destroyed.

Relandscaped in 2010, the garden features a rather dramatic memorial (pictured) to the suffering of women and children in war in general and medieval figure, Catrin Glyndwr in particular. Unveiled in 2001, it was designed by Nic Stradlyn-John and sculpted by Richard Renshaw.

The daughter of the Welsh Prince Owain Glyndwr, she was captured in 1409 and brought with her children and mother to the Tower of London. Catrin and two of her children died in late 1413 and were buried in the former church.