93. A Moment in London’s History – The execution of William Wallace… 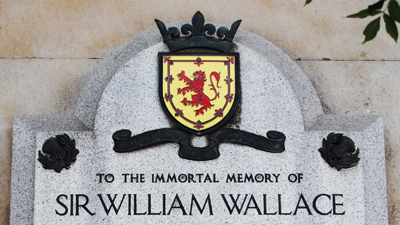 This year marks the 710th anniversary of the execution of Scottish rebel William Wallace in Smithfield so we thought we’d take a quick look at the circumstances of that event – made famous in recent times through the movie Braveheart.

For some eight years, Wallace had been a thorn in the side of the King Edward I, promoting active resistance to his rule in Scotland after Edward forced the abdication and usurption of the crown of John Balliol.

Following a crushing defeat at the Battle of Falkirk on 22nd July, 1298, however, Wallace went to France where he attempted to gain French support for rebellion in Scotland but the effort proved ultimately futile and Wallace, back in Britain but refusing to submit to English rule, remained on the run.

At least until he was captured on 5th August, 1305, by Sir John Monteith, who had been made Sheriff of Dumbarton by King Edward I, at Robroyston near Glasgow.

Taken to Carlisle, he was bound hand and foot before being taken south to London in chains.

Wallace’s trial took place on 23rd August that year at Westminster Hall and, despite his protestations that he couldn’t be guilty of treason having never sworn loyalty to the English Crown, a guilty verdict was handed down along with the sentence of a traitor’s death – being hung, drawn and quartered.

Taken to the Tower of London, Wallace was stripped naked and then strapped to a wooden hurdle which was dragged by two horses through the streets via Aldgate to The Elms at Smithfield where he was hanged on a gallows.

Cut down while yet living, he was disembowelled and castrated and his entrails burnt. Wallace was then decapitated and his body cut into quarters which were sent to Berwick, Newcastle, Stirling and Perth as a warning against treason. His tarred head, meanwhile, was put on a pike and set above London Bridge.

A memorial to Wallace can now be found on the wall of St Bartholomew’s Hospital at West Smithfield (pictured – for more on that, see our earlier post here). 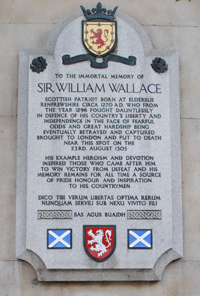 He was captured in Scotland but it was actually at Smithfield in London that the Scottish leader, Sir William Wallace, was put to death on 23rd August, 1305.

Erected in 1956 by “Scots and friends at home and abroad”, a plaque located on the wall of St Bartholomew’s Hospital overlooking the former execution ground commemorates the “Scottish patriot” Wallace, saying that from the year 1296 “fought dauntlessly in defence of his country’s liberty and independence in the face of fearful odds and great hardship”. It goes on to note that he was “eventually betrayed”, captured and executed “near this spot”.

Elsewhere the memorial reads: “His example, heroism and devotion inspired those who came after him to win victory from defeat and his memory remains for all time a source of pride, honour and inspiration to his countrymen”.

Having co-led the Scottish to victory against the army of King Edward I at the Battle of Stirling Bridge in 1297, Wallace was later knighted for his efforts and subsequently served as a Guardian of the Kingdom of Scotland.

Following his defeat at English hands in the Battle of Falkirk in 1298, he escaped and continued to evade capture until he was apprehended near Glasgow in August 1305. Brought to London where he was put on trial in Westminster Hall. Summarily found guilty of treason, he was stripped naked and dragged to Smithfield and it was there that he suffered the horrible death of being hung, drawn and quartered.

And while the 1995 movie, Braveheart, had Wallace crying out “Freedom” as he died, his last words are actually not recorded. His tarred head was subsequently displayed on a pike atop London Bridge while his limbs were sent to towns including Stirling in Scotland.