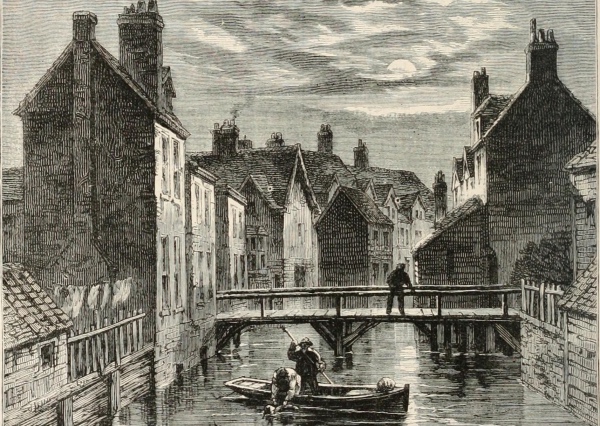 Famous for its mentions by Charles Dickens, Jacob’s Island – located in Bermondsey – was not actually a true island.

It was a small parcel of land formed into an “island” thanks to its location in a loop of the Neckinger River and, on the south side of the loop, a man-made ditch which was used as a mill run for Bermondsey Abbey.

The “island” – which on a modern map was located just to the south of the street known as Bermondsey Wall West, east of Mill Street, west of George Row and north of Wolseley Street, was home to a notorious slum or “rookery” between the 18th and early 19th centuries,

It was most famously mentioned in Charles Dickens’ book, Oliver Twist and was where the notorious Bill Sikes died in the mud of ‘Folly Ditch’ – a reference to the ditch surrounding the island – as he attempted to elude the authorities.

Dickens describes Jacob’s Island in the book as a place “where the buildings on the banks are dirtiest and the vessels on the river blackest with the dust of colliers and the smoke of close-built low roofed houses, there exists the filthiest, the strangest, the most extraordinary of the many localities that are hidden in London”. In the preface to the 1867 edition of the book, he even wrote of its ongoing existence which was apparently doubted by one City alderman, saying “Jacob’s Island continues to exist (like an ill-bred place as it is) in the year one thousand eight hundred and sixty-seven, though improved and much changed”.

The slum itself existed until the late-1800s – much of it was razed in a fire of 1861 – in subsequent decades, the ditches surrounding it were filled in and the area redeveloped into warehouses.

The River Neckinger, incidentally, is one of London’s ‘lost rivers’. Its name means ‘devil’s neckerchief’ or ‘devil’s necklace’ – a reference to the hangman’s noose – and it is believed to refer in here to the gibbet from which pirates were hung close to the mouth of where the river entered the Thames at nearby St Saviour’s Dock and where their bodies left to deter others from taking a similar path.