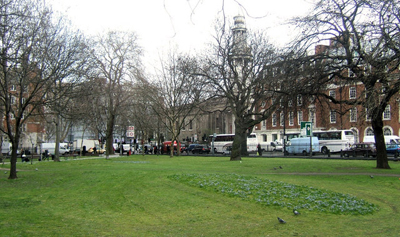 The name Euston first makes an appearance in London in the Georgian era when Euston Square was laid out north of the City.

The moniker came from the square’s landlord, the Duke of Grafton, who owned a country seat called Euston Hall near Thetford in Suffolk, and apparently derives from the Anglo-Saxon ‘Efe’s Tun’ meaning the ‘farmstead of a man called Efe’.

The now much altered square (the gardens of which are pictured) was originally developed in the 1820s; in the 1850s the New Road – which had been developed by the second Duke of Grafton, Charles Fitzroy, in the 1730s to take farm traffic off Oxford Street and Holborn – was renamed Euston Road.

It only makes sense then that when the mainline station on that road was developed in the 1830s (it opened in 1837, exactly a month after Queen Victoria became the monarch), it too was named Euston (as was the now long-gone Euston Arch – see our earlier post here).

Interestingly the area around Euston Road also features numerous references to Grafton in honour of the duke – Grafton Street, Grafton Place and Grafton Way among them – while other streets also have links to the names of the dukes’ family – Warren Street (which also lends its name to a Tube station), for example, is named for Anne Warren, the wife of the second duke’s grandson.

One thought on “What’s in a name?…Euston…”