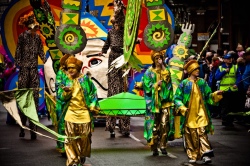 • Londoners are celebrating St Patrick’s Day with events taking place across the city over this weekend. They include a series of specially commissioned walking tours focusing on London’s Irish history, Irish poets and musicians busking at Underground stations, and a series of open air gigs featuring Irish women artists at Camden Market on Saturday. Cinemas in the West End, meanwhile, are showing Irish films in connection with the weekend while exhibitions to mark the event include #IamIrish, a celebration of mixed race Irish people by artist Lorraine Maher featuring the work of photographer Tracey Anderson, which runs at London City Hall until 13th April. On Sunday, the culmination of the festive weekend, a procession featuring Irish marching bands and dance troupes kicks off at noon from Green Park while in Trafalgar Square there will be a series of stage performances – including a tribute to Dolores O’Riordan, the Cranberries frontwoman who died in London earlier this year – as well as a special zone for families and an Irish street for market. For the full programme of events, head to www.london.gov.uk/stpatricks. PICTURE: A St Patrick’s Day celebration in years past. (Garry Knight (licensed under CC BY 2.o))

• The work of the UK’s Special Forces are the subject of the first major exhibition at the National Army Museum in Chelsea since it reopened in March last year. Special Forces: In the Shadows examines of the history of the Special Forces from its creation during World War II up until today and looks at the unique role each of the six units – the Special Air Service (SAS), Special Boat Service (SBS), Special Forces Support Group (SFSG), Special Reconnaissance Regiment (SRR), 18 (UKSF) Signals Regiment – play in security and military operations. Among objects on show in the exhibition’s seven distinct areas are a compass that Paddy Mayne wrenched from an enemy plane cockpit and a complete SAS Counter Terrorist Kit from 2007 as well as personal testimonies, video and photography. There’s also interactive exhibits to help visitors understand the challenges soldiers in the field face. Admission charge applies. Runs until 18th November. For more, see www.nam.ac.uk.

• Two exhibitions celebrating the work of British-European artist Tacita Dean have opened this week. Tacita Dean: PORTRAIT at the National Portrait Gallery focuses on portraiture primarily through the medium of 16mm film and, the first in the gallery’s history to be devoted to the medium of film, features works including the six screen installation from 2008, Merce Cunningham performs STILLNESS…, as well as Dean’s film of Claes Oldenburg, Manhattan Mouse Museum and a film diptych of Julie Mehretu, GDGDA – all seen in the UK for the first time. Meanwhile Tacita Dean: STILL LIFE has opened at the neighbouring National Gallery and features a selection of the gallery’s works curated by Dean as well as some by the artist herself and her contemporaries. There’s also a new film, Ideas for Sculpture in a Setting, made especially for the exhibition. A third exhibition on Dean will be held at the Royal Academy of Arts. For more, see www.npg.org.uk, www.nationalgallery.org.uk and www.royalacademy.org.uk.