Nestled next to Westminster Abbey opposite the Houses of Parliament, St Margaret’s has long been known as the “parish church of the House of Commons” (although we should point out it’s not officially a parish church). As a result, it probably doesn’t come as a surprise that it has a couple of significant links to former PM Winston Churchill.

Among the most momentous personal occasions was when Churchill married Clementine Hozier in the church on 12th September, 1908, after a short courtship. A headline in the Daily Mirror called it ‘The Wedding of the Year’.

After the fighting of World War II ended in 1945, on VE Day Churchill, in a move reflecting that taken by then PM David Lloyd George after World War I, led the members of the House of Commons in procession from the Houses of Parliament into the church for a thanksgiving service.

In 1947, the church was the scene of another Churchill wedding, this time that of Sir Winston’s daughter, Mary who was wedded to Captain Christopher Soames of the Coldstream Guards on 11th February.

In this, the final in our series looking at London’s World War I memorials, we’re taking a look at one of the city’s most visited monuments – the grave of the Unknown Warrior in Westminster Abbey.

Located at the west end of the minster nave (pictured is the west front of the abbey inside of which lies the grave), the grave is that of a British soldier whose body was brought back from France and buried on the site on 11th November, 1920. The grave, which also contains soil brought from France, is covered by a slab of black marble from Belgium.

The slab bears an inscription written by Herbert Ryle, then dean of the abbey, which commemorates the “many multitudes” who died during World War I. “They buried him among the kings because he had done good toward God and toward his house”.

It is believed the idea for the memorial was that of a chaplain at the front during the war – Rev David Railton – who in 1916 saw a grave in northern France which featured a cross upon which was written, “An Unknown British Soldier”. He wrote to Ryle about what he’d seen and the idea for the new memorial slowly took shape – albeit with the initial misgivings of some including King George V.

Representing servicemen from the army, navy or air force from anywhere within Britain and its dominions who died in the war and have no other memorial or known grave, the unidentified body which lies in the grave is believed to have been selected at random from among a number bodies of soldiers who died early in the war – accounts suggest they numbered either four or six – and which were exhumed from battle areas at the Aisne, the Somme, Arras and Ypres.

Covered with Union flags, the bodies were taken to a chapel at St Pol on 7th November, 1920, and one selected by Brigadier General LJ Wyatt, commander of troops in France and Flanders.

The three remaining bodies were reburied while the selected remains were placed in two coffins, the outer one made of oak harvested from a tree which had grown at Hampton Court Palace. A 16th century crusader’s sword taken from the Tower of London’s collection was placed in the wrought iron bands of the coffin and it was then covered with a flag which Rev Railton had used as an altar cloth during the war (known as the Ypres or Padre’s Flag, it now hangs nearby in St George’s Chapel at the abbey).

The coffin was then transported on the destroyer HMS Verdun to Dover and then taken by train to Victoria Station before, on the morning of 11th November, it was placed on a gun carriage drawn by six black horses and transported through massive but silent crowds which lined the streets.

Pausing at the Cenotaph in Whitehall, King George V unveiled the monument which represent an empty tomb (see our earlier post here) and placed a wreath on the coffin and then, followed by the king, other royal family members and dignitaries, it was taken to the abbey minster and lowered into the grave at a special service attended by the king, Queen Alexandra, the queens of Spain and Norway, and Prime Minister David Lloyd George and former Prime Minister HH (later Lord) Asquith (a recording made of some of the service – apparently conducted simultaneously with one at the Arc de Triomphe in Paris – became the first ever electrical recording to be sold to the public).

Thousands of mourners paid their respects at the open grave before the grave was filled in and covered with temporary stone on 18th November. The marble stone which now stands there was unveiled at a special service on 11th November the following year. A framed US Congressional Medal of Honor, conferred by General John J Pershing on the unknown warrior on 17th October, 1921, hangs from a pillar nearby.

Located in one of the most prominent sites in London, Parliament Square is these days perhaps best known as a protest site for those wanting to attract Parliament’s eye. And while, unlike say, Trafalgar Square, many visitors to London may not know its name, its proximity to the Houses of Parliament, Whitehall, Westminster Bridge and Westminster Abbey means it’s rarely off anyone’s tourist agenda. 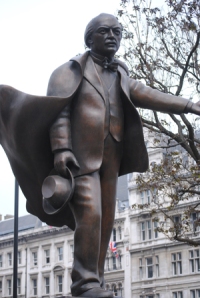 The history of the square goes back to 1868 when architect Sir Charles Barry (responsible for the design of the Houses of Parliament) designed a square to improve traffic flow in the area (and demolished many buildings – apparently the area was a slum – in the process).

The roads around the square featured London’s first traffic signals (it used semaphore arms rather than lights and was installed at the meeting of Great George and Bridge Streets) and in addition the square was originally the location for the Buxton Memorial Fountain which moved to its present position in Victoria Tower Gardens in 1940 (see our earlier post on the fountain here). In 1950, the entire square was redesigned by architect George Grey Wornum.

The square is home to a plethora of statues including former PMs Sir Winston Churchill, a relatively recent statue of David Lloyd George (pictured), Sir Robert Peel (also the founder of the Metropolitan Police Force – see our earlier post here), Benjamin Disraeli, the Earl of Derby and Lord Palmerston as well as South African PM Jan Christian Smuts and, (if you count the space in front of Middlesex Guildhall), US President Abraham Lincoln (a replica of a statue in Lincoln Park, Chicago) and former Foreign Secretary and PM George Canning. Among the last statues added was a nine foot high bronze figure of Nelson Mandela which was placed in the square in 2007 after an unsuccessful push to have it located in Trafalgar Square.

Among the most high profile of protests to have been held there is that of the late peace campaigner Brian Haw who camped on the square for 10 years until 2010. Among the most recent protests this year has been a colourful demonstration by beekeepers, calling for a ban on pesticides.

• An appeal has been launched to raise the final £500,000 of a £7 million project to restore Sir John Soane’s private apartments in his former home overlooking Lincoln’s Inn Fields in Holborn. Phase one of the three year restoration project, Opening up the Soane, is expected to be complete by late 2012 with the entire project – which will see all of the rooms open to the public – to be completed by 2o14. The eight rooms being restored in the project, all of which are located on the second floor of No. 13 Lincoln’s Inn Fields – one of three adjoining properties Soane owned , include the architect’s bedroom, bathroom, oratory and book passage as well as Mrs Soane’s morning room and a room containing Soane’s architectural models. The building  already contains the Sir John Soane Museum which features an eclectic and at time outright strange mix of artefacts Soane, designer of the Bank of England (although it has since been substantially altered), collected during his lifetime. For more information, see www.soane.org.

• Highland cattle will return to Richmond Park in autumn to help create patches of bare ground for wildflowers to grow after the success of a recent grazing trial. Richmond Park has the most extensive area of natural grassland in London and the type of grassland – known as ‘acid grassland’ – is a nationally rare habitat. Richmond Park is already home to 650 red and fallow deer. For more information, see www.royalparks.org.uk.

• On Now – A new exhibition of street photography in London has just opened at the Museum of London. London Street Photography showcases 200 candid images of everyday life in the city with images ranging from sepia-toned scenes of horse-drawn cabs captured by tripod mounted cameras through to the use of digital cameras in snapping images of 21st century residents. Among the 59 photographers whose work is on display is that of Paul Martin, who pioneered the idea of candid street photography in London in the early 1890s, freelance photojournalist Henry Grant who photographed London’s streets in the Fifties and Sixties, and Stephen McLaren, known for his contemporary “quirky and colorful” street images. Entry is free. The exhibition runs until 4th September. For more information, see www.museumoflondon.org.uk.

• On Now – The first major exhibition in 30 years of the work of EO Hoppe has opened at the National Portrait Gallery. Hoppe, who lived from 1878 to 1972, is considered one of the most important photographers of the early 20th century and is described as the “prototypical celebrity photographer”, shooting among others Margot Fonteyn, George Bernard Shaw, King George V, David Lloyd George and Ezra Pound. He also published the Book of Fair Women – photographs of women he believed to be the most beautiful of earth – in 1922 and in the Twenties and Thirties increasinly spent time outside the studio photographing street life. Hoppe Portraits: Society, Studio and Street runs until 30th May. For more information, see www.npg.org.uk.