Nestled next to Westminster Abbey opposite the Houses of Parliament, St Margaret’s has long been known as the “parish church of the House of Commons” (although we should point out it’s not officially a parish church). As a result, it probably doesn’t come as a surprise that it has a couple of significant links to former PM Winston Churchill. 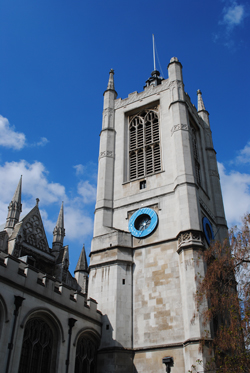 Among the most momentous personal occasions was when Churchill married Clementine Hozier in the church on 12th September, 1908, after a short courtship. A headline in the Daily Mirror called it ‘The Wedding of the Year’.

After the fighting of World War II ended in 1945, on VE Day Churchill, in a move reflecting that taken by then PM David Lloyd George after World War I, led the members of the House of Commons in procession from the Houses of Parliament into the church for a thanksgiving service.

In 1947, the church was the scene of another Churchill wedding, this time that of Sir Winston’s daughter, Mary who was wedded to Captain Christopher Soames of the Coldstream Guards on 11th February.