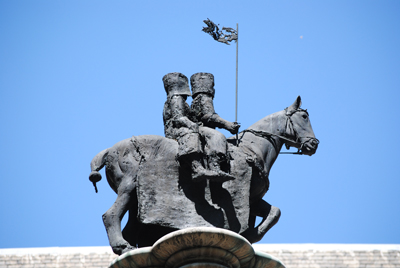 Not much remains today of the original early medieval home of the Templar Knights which once existed just west of the City of London. While the area still carries the name (as seen in the Underground station, Temple), most the buildings now on the site came from later eras. But there are some original elements.

The first was in Holborn, located between the northern end of Chancery Lane and Staple Inn, and was known as the ‘Old Temple’ after which, in the latter years of the 12th century, the Templars moved their headquarters to the new site – ‘New Temple’ or Novum Templum – on unoccupied land on the bank of the River Thames.

This new precinct included consecrated and unconsecrated areas. The consecrated part was a monastery and was located around what is now Church Court with the monastic refectory built on the site of what is now Inner Temple Hall – the medieval buttery is the only part of the original building which survives.

The lay or unconsecrated part of the precinct lay east of Middle Temple Lane, where a second hall was built on the site of what is now the Middle Temple Hall (you’ll find more on that here) which was used to house the lay followers of the order.

The original buildings also included the still existing Templar Church (pictured, along with a monument depicting the Templars outside the church), which was consecrated in 1185 during the reign of King Henry II by Heraclius, the Patriarch of Jerusalem, on a visit to London. Like all other Templar churches, its circular design was based on the design of the Church of the Holy Sepulchre in Jerusalem (the chancel was added later and consecrated in the presence of King Henry III in 1240 – for more on the Temple Church, you can see our earlier post here.

The New Temple become an important site in London (and the kingdom as a whole – the Masters of the Temple were the heads of the order in England) and was used by many of the nobility as a treasury to store valuables (and to lend money). It also had close connections with the monarchy and was, as we saw earlier this week, a power base for King John and from where he issued what is known as the King John Charter in 1215. He also used it for a time as a repository for the Crown jewels.

In an indication of the Temple’s prominence in state affairs, some of the great and powerful were buried here during this period including William Marshal, 1st Earl of Pembroke, who died in 1219, and his sons William and Gilbert (for more on those buried in the Temple, see our earlier post here). There were also apparently plans to bury King Henry III and his Queen here – this apparently spurred on the building of the chancel on the church – but they were eventually buried in Westminster Abbey instead.

Numerous relics were also apparently housed here during the Templar times including a phial believed to contain Christ’s blood and pieces of the true Cross.

The Templar era came to an end in 1312 when the order was dissolved on the authority of Pope Clement V amid some heinous allegations of blasphemy and sexual immorality which had the support of King Philip IV of France. While the pope awarded their property to the rival order, the Knights of the Hospital of St John of Jerusalem (also known as the Hospitallers), King Edward II had other ideas and ignored their claims with regard to the London property and instead, claimed it for the Crown (a dispute which went on for some years).

It later became associated particularly with lawyers, although lawyers would have certainly been at work in the New Temple given its role as banker to the wealthy (but more on its later associations with lawyers in later post).