This small walled garden, located in Southwark, for centuries served as a burial site for the poor of the area nd by the time of its closing in 1853, was the location of some 15,000 burials.

The graveyard is said to have started life as an unconsecrated burial site for ‘Winchester Geese’, sex workers in the medieval period who were licensed to work in the brothels of the Liberty of the Clink by the Bishop of Winchester.

Excavations carried out in the 1990s confirmed a crowded graveyard was on the site.

While the site had been neglected for years following its closure, in 1996 local writer John Constable and a group he co-founded, the Friends of Crossbones, began a campaign to transform Crossbones into a garden of remembrance – something which has happened thanks to their efforts and those of the Bankside Open Spaces Trust and others.

The garden provides a contemplative space for people to pay their respects to what have become known as the “outcast dead”.

A plaque, funded by Southwark Council, was installed on the gates in 2006 which records the history of the site and the efforts to create a memorial shrine.

A contemporary of William Shakespeare (and hence, given our current focus on Shakespeare, the reason why we’re featuring him), Philip Henslowe was a theatre owner and impresario who, along with John Chomley, built the Rose Theatre in Bankside.

Henslowe is believed to have been born in about 1550 and was the son of Edmund Henslowe, master of the game at Ashdown Forest in Sussex. He is known to have moved to London in the 1570s and there became an apprentice to dyer Henry Woodward. Marrying Woodward’s widow Agnes, from 1577 Henslowe lived in Southwark – in the Liberty of the Clink – where, along with other business interests including bringing in timber from Sussex, he is known to have been a prominent landlord.

He and Chomley built The Rose Theatre – the first theatre in Bankside – in 1587 on land Henslowe had purchased several years earlier and from 1591 onwards, he partnered with the acting company known as the Admiral’s Men (they had parted ways with theatre owner James Burbage after a dispute about money). In fact it was the company’s leading actor, the renowned Edward Alleyn, who married Henslowe’s step-daughter Joan.

Following the arrival of the rival Globe Theatre in Bankside in the late 1590s, Henslowe decided to make a move and built the Fortune Theatre in the north-west corner of the City which subsequently became home to the Admiral’s Men. He is also believed to have had interests in several other theatres – Newington Butts, the Swan and more latterly, the Hope in Paris Garden, a versatile facility which could be used as both animal-baiting ring and theatre.

He died in 1616, leaving behind a diary which spans the period 1592 to 1609 – it includes mention of performances of many of Shakespeare’s plays and although the Bard himself doesn’t get a mention, many of his contemporaries – Christopher Marlowe and Ben Jonson included – do. The diary – which had been written in an old account book and provides great detail of Henslowe’s theatre-related business – passed into the care of Dulwich College which his son-in-law had founded. 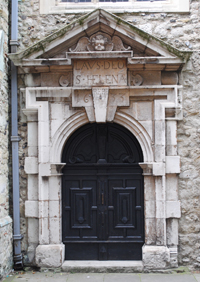 • Bishopsgate: Shakespeare is believed to have lived here in the 1590s – in 1596 tax records show he was living in the parish of St Helen’s. The twin-nave church of St Helen’s Bishopsgate (pictured), which would have been his parish church, still stands. In fact, there is a window to Shakespeare’s memory dating from the late 19th century.

•  Bankside: In the late 1590s, Shakespeare apparently moved across the Thames to Bankside where he lived at a property on lands in the Liberty of the Clink which belonged to the Bishop of Winchester. The exact address remains unknown.

• Silver Street, Cripplegate: It’s known that in 1604, Shakespeare moved from Bankside back to the City – it’s been speculated outbreaks of plaque may have led him to do so. Back in the City, he rented lodgings at the house of Christopher and Mary Mountjoy in on the corner of Monkwell and Silver Streets in Cripplegate, not far from St Paul’s Cathedral. Mountjoy was a refugee, a French Huguenot, and a tire-maker (manufacturer of ladies’ ornamental headresses). The house, which apparently stood opposite the churchyard of the now removed St Olave Silver Street, was consumed in the Great Fire of London in 1666 (the church was also lost in the Great Fire). The former church site is now located on the south side of London Wall. Silver Street itself was wiped out in the Blitz and is now lost under the Barbican redevelopment but the house lives on in a representation found on a late 16th century map created by Ralph Agas.

• Ireland Yard, Blackfriars: In 1613, Shakespeare purchased the former gatehouse of the Blackfriars Priory located here, close to the where the Blackfriars Theatre was located. It is believed the property was purchased as an investment – there’s no evidence he ever lived there but it was passed to his daughter Susanna after his death. Incidentally, there is some speculation that Shakespeare may have lived in Blackfriars when he first came to London – a man believed to have been a boyhood friend from Stratford, Richard Field, who was known to have lived there.

This week we look at another “lost” palace of London but this time it’s not one built primarily for kings and queens. Rather we’re taking a look at the former Thameside home of the Bishops of Winchester. 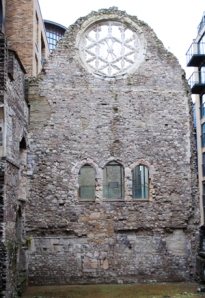 Located in Southwark, Winchester Palace (also known as Winchester House) was built in the 12th century as the London residence of the bishop, a major landowner in the area.

The palace’s hall was extravagantly decorated and is known to have played host to royalty including King James I of Scotland and Joan Beaufort whose wedding feast was held there in 1424. It’s also suggested that King Henry VIII may have met wife number five, Catherine Howard, there.

The remainder of the palace was arranged around two courtyards and as well as buildings including its own prison and brewhouse, it also boasted a tennis court, bowling alley and pleasure gardens. It was used up until the Civil War – during which it served as a prison – before, in a growing state of deterioration, being let out for tenements and warehouses. Much of what remained was destroyed by fire in 1814.

Today all that remains above ground is a wall which stood at the west end of the great hall, mostly dating for the 14th century. Now in the care of English Heritage, it features a magnificent (albeit glassless) rose window, 13 feet in diameter, and three doors, believed to have led to the buttery, pantry and kitchen.

The palace was located in what was known variously as the ‘Manor of Southwark’, the ‘Liberty of Winchester’ or the ‘Liberty of the Clink’ (the word ‘clink’ refers to the bishop’s notorious prison – more on this another time). This was an area of land under the direct jurisdiction of the Bishop of Winchester and outside the jurisdiction of the City of London and become particularly known for prostitution – the Bishop was granted the power to licence prostitutes in the 12th century – with the prostitutes referred to as “Winchester Geese”.

The current ruins were found during the area’s redevelopment in the 1980s. Remains of Roman buildings were also found underneath where the palace once stood.