Dating from the early 1600s, London’s oldest public park is Finsbury Circus Gardens, located just to the north of London Wall and east of Moorgate. 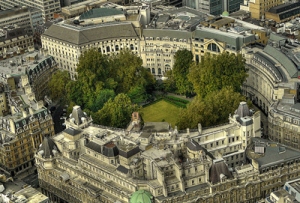 The now heritage-listed gardens were open as a public park from 1606 (and was originally known as Moor Fields – the moors were drained and gravel walks laid out in 1527 but it wasn’t until 1606 that the area was laid out with elm trees and benches).

The park wasn’t enclosed until 1815-17 when City of London surveyor William Montague laid the area out according to the designs of prominent London architect George Dance the Younger.

The gardens were acquired by the City of London Corporation in 1900 and in 1909 were replanned. The oval-shaped park, the largest of the City’s gardens, is these days home to the City of London Bowling Club, the only bowling club in the City (founded in 1924; the bowling green dates from the following year and the current pavilion from 1968).

During World War II a barrage balloon was anchored here to deter low level air raids. Among it’s other claims to fame is the Tudor era bat (apparently a forerunner of the modern cricket bat) found on the site in the 1980s and skulls which have also been found dating from the Roman period.

The gardens are currently partly closed due to the Crossrail development.